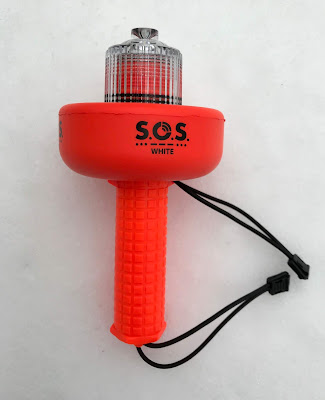 "The sea, the great unifier, is man's only hope. Now, as never before, the old phrase has a literal meaning: we are all in the same boat."  - Jacques Yves Cousteau Jacques may be right about all of us being in the same boat, but that no longer means we all carry the same kind of emergency distress signaling gear.  As I wrote a few years ago when Sirius Signal released their original A-1001 LED SOS distress light, conventional pyrotechnic flares have some serious competition for keeping boaters safe and complying with U.S. Coast Guard regulations. But before we dive into the details, you might be wondering just what is an LED SOS distress light and which USCG regs are relevant.  An LED SOS distress light, often referred to as an electronic Visual Distress Signal Device (eVDSD) in the industry, is simply a battery operated light that flashes SOS in Morse code.  The U.S. Code of Federal Regulations Part 175.130 states that an electric distress light meeting the st
2 comments
Read more 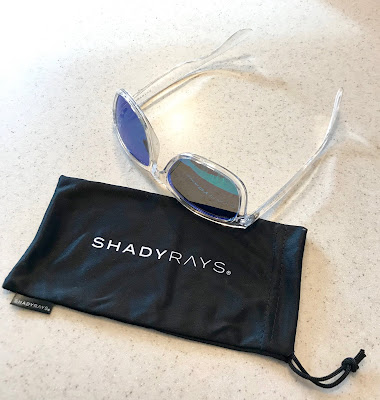 "Vision is the art of seeing what is invisible to others." -Jonathan Swift I’ve only tried one pair of Shady Rays , but I can confidently say that these are affordable, quality sunglasses that look good and get the job done.   And if you’re the type of person that wants to feel good about the companies you do business with, Shady Rays gets some points there too.   They are an independent sunglasses company that provides 11 meals for every order to help fight hunger in the U.S. through FeedingAmerica .  To date, they've provided over 2.6 million meals to fight hunger. " Making the best shades for 24/7 action." &  " Live Hard. We Got You. " Those are the bars that Shady Rays has set for their brand of sunglasses.  They're aiming for an audience of active outdoor types...like sailors.  To see if they can live up to the slogans, let's look at how they are constructed and what Shady Rays does to stand behind their product.  Each
Post a Comment
Read more

Picture This: From Under My Lone Palm II 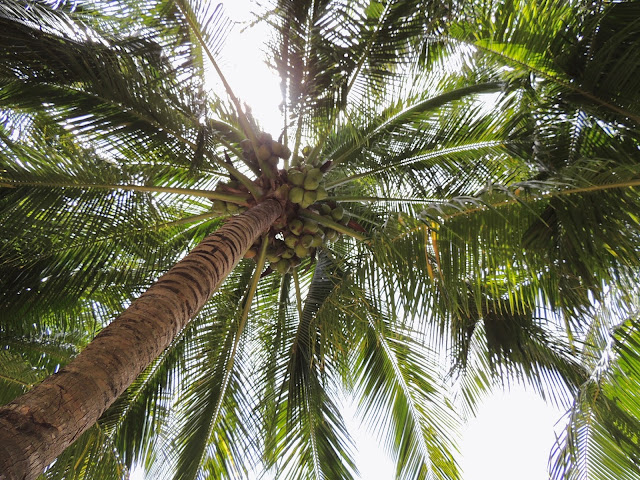 Aloha for your Feet: OluKai Footwear for Sailing 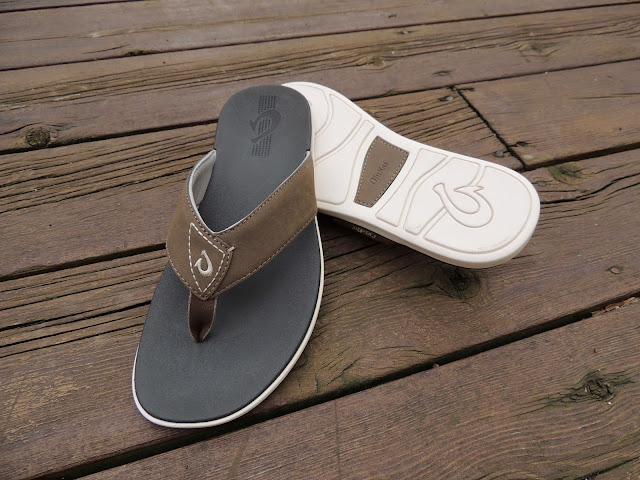 OluKai believes that everybody, no matter where they are, can live Aloha. Live "hello"? No, not exactly. The word "Aloha" goes far beyond just a greeting. The true deeper meaning is love, peace and compassion. A life of Aloha is one when the heart is so full it is overflowing with the ability to influence others around you with your spirit. Now you're educated about Hawaii's most popular word, but what about popular Hawaiian shoes for sailing? Shoes might not be the first thing that comes to mind when you think about sailing gear, but good grip and comfortable feet can make life on deck or the dock better. Here's two pair of OluKai's I've been trying out lately that I recommend for boat use: Holona ( "Sailing, Traveling" ) Non-marking molded rubber outsole with "traction pods" Built for the water: quick drying and water-resistant 100% synthetic, 0% animal products SFLF remarks: I love the low profile design but
Post a Comment
Read more

Picture This: Winning Back Memories 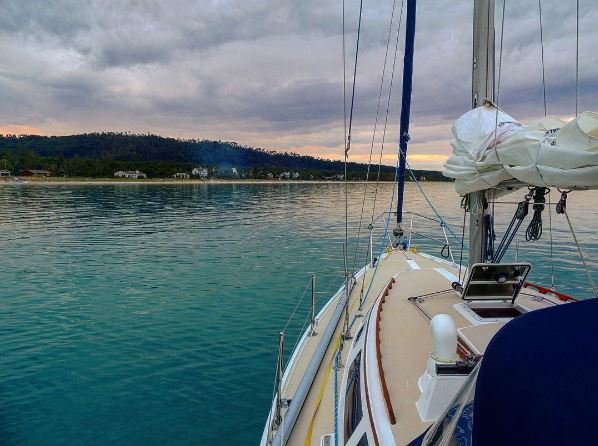 The Speed of Sail - Does it Matter How Fast You Go?

"Sail the main course, sail it in a simple sturdy craft. Keep her well stocked with short stories and long laughs. Go fast enough to get there, but slow enough to see. Moderation seems to be the key." Lyrics from Barometer Soup by Jimmy Buffett Does speed matter when you're sailing? I suppose that question depends on why you're sailing in the first place. Racing? Yes, speed matters. Day sailing to enjoy time on the water? Speed probably doesn't matter. Cruising? Sometimes speed matters.  When acting as weekend warriors or taking a 2 week summer cruiser, we've taken passages of between 6 to 90 nautical miles at time. Speed doesn't really matter to us on the short port hops of say less than 20 nautical miles, but when we're approaching hour 12 of a 90 nm passage, I admit that I start tweaking the sails to coax another 1/4 knot of boat speed from the wind gods. Doing a bit of math, if I would have found that 1/4 knot when I first raised the sa
1 comment
Read more

Camping on a Keel - Trailer Sailers for Cruisers 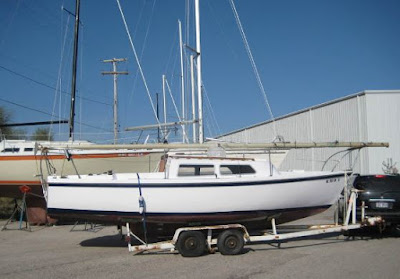 When I think of the cruising lifestyle, I generally picture a sturdy 35'+ sailboat capable of serving as a liveaboard and hopping among idyllic anchorages sprinkled with a few marina days in between to recharge and restock. But my myopic view neglects a whole other niche of cruisers who can load up their sailboat on a trailer and tow it down the road to a faraway inland lake or a port many latitudes to the south. It seems trailerable cruising sailboats could also be a good fit for a weekend warrior on a budget who doesn't want to deal with seasonal marina slip fees or days long sails between destinations. In any case, I should know better since my first sailboat (a Helms 25) was in fact a trailer sailer, although I didn't use it as such. Here's a throwback to s/v Hannabel , our Helms 25 and very first boat Not all sailing adventures are found by crossing oceans. Some are waiting across multiple counties on the other end of the interstate. And so, from my non-tra
2 comments
Read more

What's a Great Lakes sailor to do in the off season? Well for starters, there's the Chicago Boat, RV & Strictly Sail Show (formerly just "Strictly Sail Chicago") from January 11-15, 2017. The show is held at McCormick Place these days and includes much more than just sailboats, as the name implies. Even if you're not in the market for a new sailboat, there are plenty of vendors and seminars to occupy your time and interest. Here's just a sample of the talks and seminars you can attend from some of your (and my!) favorite sailing bloggers: Bahamas Adventure: Berrys, Exumas and Island Life from Katie & Jessie on a Boat Cruising Couples: An Egalitarian Approach to Cruising from Teresa and Ben (Sailing Simplicity and the Pursuit of Happiness)    What's it like to Live-Aboard a Cruising Sailboat on a Long Voyage from Paul Exner Or maybe you're like the Bumfuzzles and you're even considering a switch from a cruising sailboat to a
14 comments
Read more

Some of us sailors sail because we like simplicity and disconnection from all of land's technology. But there's some technology that's just too useful and convenient to be left behind. The new wave of small, portable lithium ion jump starters are just such technology. It wasn't all that long ago that I was carrying around one of those heavy (>20lbs) old school jump starters that's essentially like stocking an extra group 26 12-volt battery. The thing I love most about of the new lithium ion jump starters is their compact size and light weight. The Gooloo gp37 I recently tested weighs in at a svelte 1.1 pounds and is smaller than a masonry brick, so portability and stowage aren't a problem. What sets the GP37 apart is its' power. This little jump starter packs a peak advertised current of 600A, with a more realistic starting current of 300A. Those numbers are a bit lower than the old school heavyweight jumpers, but they're on the high end for the smal
Post a Comment
Read more 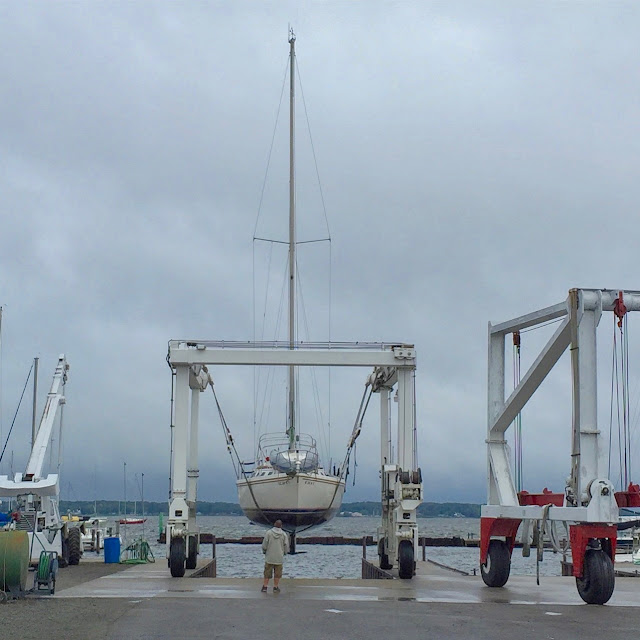 Haulout Blues (Photo by K. Walters) Though below me I feel no motion Standing on these mountains and plains Far away from the rolling ocean Still my dry land heart can say I've been sailing all my life now Never harbor nor port have I known The wide universe is the ocean I travel And the Earth is my blue boat home (Lyrics from Blue Boat Home by Peter Mayer)
Post a Comment
Read more
More posts