Double Enders According to Perry (Guest Post by Bob Perry)


Have you ever wondered why many classic bluewater sailboats are double enders?  Is there something inherent in the double ender design that makes them particularly well suited for offshore work?  Or maybe you're like me and simply find them to be irresistibly good looking and aspire to own one regardless of the design's intended function.  I'm pleased to welcome a very special guest blogger to SailFarLiveFree.com.  Bob Perry, one of the world's foremost yacht designers and a double ender aficionado, has graciously agreed to share his thoughts on my blog.  For more of Bob's writing, try Yacht Design According to Perry.  What follows are Bob's words...

Double-Enders According to Perry, by Bob Perry
Oh boy. I get to write on someone else’s blog. I think I will write about double enders as a subject in itself. Without bragging too much I think I might  be responsible for more double enders on the water than any other designer. I don’t have a  total number but it has to be close to 1,500 boats maybe more. I know double enders. I have always been drawn to double enders from the time I was 15 years old. I used to walk from our house on Mercer Island, across the floating bridge and down to Lake Union where I would sit and dream, aboard a converted Bristol Bay fishing boat they had for sale at Vesoga’s brokerage. I was 15 and there was no way I could buy the boat but I could dream. 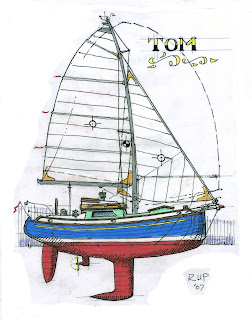 I was lucky as a kid in that I became aware of Bill Garden’s design early on. Bill did some great double enders. Some were based on the Colin Archer style and some in Bill’s unique way were straight from Mars. Walking the docks one day at Shilshole Bay Marina I was stopped dead in my tracks by a long, skinny, light green boat that looked like no other boat in the marina. I knew I was looking at a very special boat but I had no idea what it was. It was OCEANUS, Bill’s own boat. In time I would get to crew on OCEANUS for local races. I loved that boat. I also learned about and studied the double enders of William Atkin. His ERIC was a favorite of mine. One of the very first boats I drew hull lines for was a 32’ double ender I called BUDDY after Bud Stantorf, the man who really taught me how to sail. He died when I was 16. The Albert Strange canoe yawls remain some of my all time favorites.

Years later, with the IOR making people angry, a reactionary movement sprung up in the cruising community. Heavy, slow, salty, Colin Archer type double enders propelled by the Westsail movement were the accepted boats for offshore cruising. For some reason double enders were seen as safer offshore boats. This probably came from the Colin Archer lifeboat tradition. But there were all sorts of strange theories as to why the double ender was the best hull form for offshore. “The stern parts the following seas.” I call this the “Moses effect”. Maybe the stern parts the following sea because there is not enough buoyancy aft for the stern to rise to the following sea. “There is more reserve buoyancy aft.” This is certainly not true in a boat like a Westsail with almost no stern overhang at all. There is almost no buoyancy aft. Ok, fine, what about a canoe stern? Yes, a canoe stern can give you far more buoyancy aft than a Westsail type stern but a nice broad transom stern with some overhang will have far more buoyancy aft than a canoe stern.  “In a double ender the heeled waterlines are more balanced.” Yes, in most cases this is true and it’s a good thing but I’m not certain it makes a boat more seaworthy or sea kindly. It does make some boats easier to balance over a wide range of heel angles.
Then why did I make the Valiant 40 a double ender? Marketing! It was just assumed that offshore cruising boats had to be double enders and rather than buck that trend I decided to go with it and at the same time add my own twist to the shape to try and improve the performance of the double ender.


The stern shape I used for the Valiant 40, 32 and 47,  Esprit 37, Tayana 37 ( they built over 600 of these), Hans Christian 34 ( my step child the HC 36 aka Union Polaris 36,  Mao Ta 36, et al), Polaris 43, the Baba 30, 35 and 40, the Tashiba 31, and 36 was what I began to call a “tumblehome canoe stern”. I got the idea for this shape from a K. Aage Nielsen design, HOLGER DANSK. “Tumblehome” because the way the stern profile rolls back forward at the top.  I think K. Aage got the idea from a number of Scandinavian designers and you could probably trace the origins of the basic tumblehome stern profile back to the Viking ships. I didn’t “invent” anything. I will take credit for combining some basic design elements into a new combination to try to bring the double ender up to date with modern designs. But Skip Calkins had done this earlier with his spectacular Calkins 50 double ender. Garden had tried to do it with OCEANUS but as much as I revered Bill and loved OCEANUS it really had a weird shape below the DWL and a strange distribution of volume. Aesthetically I found OCEANUS hard to beat but on the race course an 8 meter could beat us boat for boat. The Valiant used the midsection of an IOR two tonner with a sensible skeg hung rudder and one of the first NACA foil section keels ever seen on a cruising boat. My other double enders were mostly full keel boats but again I tried to do what I could to bring their performance level up.


I remember sitting at dinner one night with the Lafitte group who built the Lafitte 44. At the other end of the dining table I could hear a discussion going on about the benefits of the canoe stern. I thought to myself, “What BS.” If any boat is going to spend it’s life moving forward the best way to end the boat is with a transom. The bow and the stern do very different jobs. The stern should not look like the bow. I don’t think there really is a cogent argument for why double enders are the best sea boats. But if you insist on sailing around in reverse I think a double ender makes the most sense.
But I still like double enders. I’m working on a new 62’ double ender right now. This is the 62’ SLIVER and it is a marvelous, long and skinny double ended sled being built now in Hadlock. I just like the look. Years ago YACHTING Magazine wanted me to come over to their mag and write their design reviews. I was happy at SAILING but YACHTING offered me twice the money. I said I’d think about it. They said why don’t you try a test article to see if we can work together. I decided to write an article on double enders. I decided to interview a few other designers for the article and get their thoughts on  double enders. I asked each one, “Why is a double ender better?” They all said it wasn’t better than a transom sterned boat. All except Bill Crealock who said the double ender was better but when I asked why he couldn’t  or wouldn’t tell me. I also asked these designers what kind of boats they personally sailed. All but one sailed a double ender. I had an El Toro pram at the time so I considered that a double  ender. The bow looked like the stern.


I am often thought of as primarily a designer of double enders. That’s OK. At least I am thought of. The Valiant 40 did get me into the first 15 people inducted into CRUISING WORLD’s Hall of Fame. That made me feel really good. But if you look at my entire body of work I have designed far more transom sterned boats than double enders. For a wide variety of reasons a transom works best. But if I sat down this afternoon to design a new boat just for me there is absolutely no doubt it would be a double ender.
I always thought my Esprit 37 RICKY NELSON had the prettiest fanny in any anchorage.

Looking for more information on bluewater cruisers? Check out these articles too:

And check out Bob Perry's book: Yacht Design According to Perry