Showing posts with the label de La Salle
Show all

Ghosts of the Great Lakes 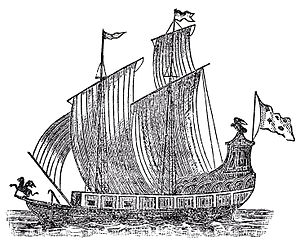 Every year or so, a new lost shipwreck is discovered somewhere in the Great Lakes .   Many are remarkably well preserved because of the cold, freshwater in the Great Lakes .   With literally thousands of ships lost (some estimate as many as 8,000) in the inland seas, it's likely this trend of discovery will continue.  Perhaps the most coveted and yet to be discovered lost shipwreck in the Great Lakes is that of  Le Griffon. Le Griffon  was a French barque ( or "bark", referring to the rig which consists of multiple masts, fore-and-aft sails on the aftermost mast and square sails on all other masts) commanded by famed French explorer Robert de LaSalle.  She displaced around 40 tons and was likely only 30 to 40 feet long.   LaSalle was seeking a Northwest Passage to China for France .   Le Griffon was launched in 1679 by LaSalle as a way to control the fur trade with Native Americans in the Great Lakes region.   Le Griffon may very well be the first “ship” to have sai
Post a Comment
Read more
More posts