"From a small seed a mighty trunk may grow." - Aeschylus

Have you seen the seed of a redwood tree?  The Aeschylus quote above embodies what many of us know in our minds but still sometimes find hard to believe with our eyes.  It was that way when I first heard about Andrew Bedwell's next big adventure and laid eyes upon his tiny sailboat.  There are plenty of sailors who have crossed the Atlantic Ocean in a wide variety of vessels, but none who have done so aboard a sailing vessel so diminutive as Bedwell's ironically named "Big C".  Ready for the specs?  Big C is just 39 inches long!  This is a boat that even my 10-year old daughter would find cramped, and yet Andrew Bedwell intends on sailing it from St. Johns, Newfoundland to Cornwall, England in May of 2023, and by so doing breaking the world record for the smallest vessel to sail across the Atlantic.

The ~1,900 mile record is currently held by American sailor Hugo Vihlen who completed the Atlantic crossing in a comparatively lengthy 5'4" sailing vessel during 1993.  Vihlen's voyage took 115 days to complete.  Bedwell hopes to complete it in 60 days but is provisioning Big C for 90 days if need be.  Most everything is to be stored in watertight compartments both on the interior and exterior of the tiny vessel.

You might be wondering about the "Big C" name.  It's in honor of Andrew Bedwell's friend Tom McNally, who also has held a trans-Atlantic record.  McNally died of cancer in 2017 and Bedwell is using "Big C" as both a play on words ("Big Sea") and as an effort to raise money for cancer research.

I recently interviewed Andrew Bedwell about his upcoming voyage and record breaking attempt.  I am pleased to share some of the interview here on SailFarLiveFree.  A big "thanks" goes to Andrew for taking the time to share his thoughts.  And may something mighty grow from the small seed that he's planting while sailing Big C.

SFLF: What's your sailing background and how has it prepared you for the Atlantic crossing on Big C?

Andrew: I sail solo most of the time and have done so since I started yacht sailing, and have had many vessels through the years. The biggest challenges so far have been a solo sail from the UK around Iceland, up into the Arctic, all in a 21ft prototype mini transat sailing boat.  That was basically a bare carbon interior, with no creature comforts at all, but at least that had a bucket to go to toilet in. 'Big C' being so small hasn't even got a bucket! 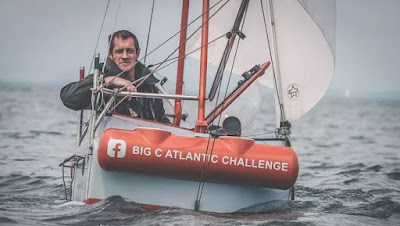 SFLF: I often hear people who are considering a major sailing voyage repeat Lin and Larry Pardey’s advice of “go simple, go small, go now”.  Your Big C boat seems to be the epitome of those words.  What do you think about that advice?

Andrew: I've read that many times, and agree, that started me pushing my boundaries and I've just gone on to push them further and further. Big C is as you say the epitome of 'go simple, go small"!  A lot of sailors always want to go larger and larger with more creature comforts.  I've had a 30ft trimaran, but it just had too many creature comforts for me (cushions, sinks, toilets and proper berths aren't for me!).  I 100% like the simple ways of living.

SFLF: What design features and equipment make Big C the right boat for this challenge?

Andrew: Firstly and mainly 'Big C' was designed and the construction started by Tom McNally who held the world record for the exact same route back in 1993.  His design and construction was fairly similar to his last vessel, but this one was made even stronger. The A-fame mast works exceptionally well as it's so strong, but also everything else is triangulated which helps makes the rig as strong as it can be. The biggest thing is the minimal space, as I've been needing to make everything as small and strong as possible, and with many things having multiple uses.

SFLF: Similarly, what is it about your own personality and character that makes you able to attempt such a feat?

Andrew: It's the limit of space for both me and the food that makes the challenge so hard. Being put into such a small area for a possible 90 odd days is a huge mental challenge, but I'm exceptionally strong mentally and can take that.  I will be taking an e-reader so that I can at least read, but that's it. However, I just love being at sea and find that the ever changing conditions absorb my mind and allows me to relax and stay calm.
SFLF: What do you foresee as the biggest challenge of this journey (weather, space, solitude, etc.)?

Andrew: In addition to what I've already noted, the weather.  And that's why we've chosen  mid-May to leave as the weather and gulf streams are in our favor.

SFLF: What advice would you give to others contemplating an epic adventure?

Andrew: Go fo it!  Life is short and you need to fill it with as many adventures as you can. Just don't try to break this record !!

SFLF: Thanks Andrew, and as always, fair winds and calm seas!

If you're looking for an adventure to follow next summer, I encourage you to follow Andrew's progress on his Face page at Big C Atlantic Challenge.  Similarly, you can support Andrew's journey via his GoFundMe campaign.

An Artist of Words, Wind, and Women (SFLF interviews Webb Chiles before his 6th circumnavigation)