"It was one of those March days when the sun shines hot and the wind blows cold; when it is summer in the light, and winter in the shade."
-Charles Dickens

That's exactly the dichotomy we're seeking with our coolers.  We want just a few cubic feet of shaded winter cold to keep our beverages frosty on those blazingly warm summer days on the water.  Only a decade or so ago it would have been tough to imagine so many choices in coolers.  I mean seriously, we're just talking about an insulated box, so how many different options and competition can there really be? 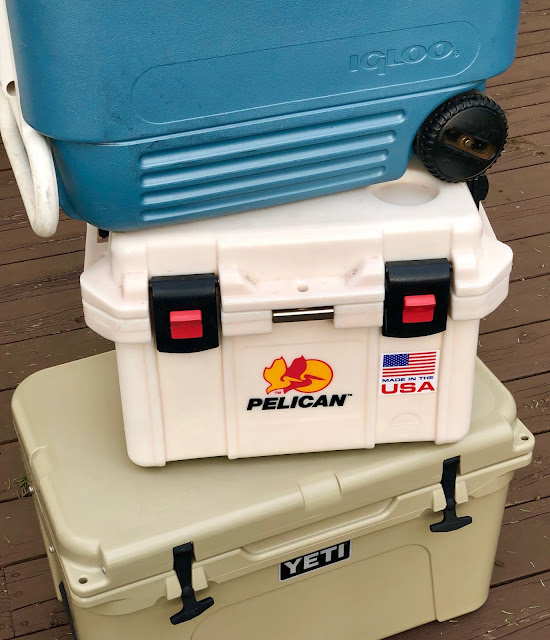 As it turns out, there are plenty of each.  The most recent trend is towards high end and high priced rotomolded coolers.  The sales pitch is that these rotomolded hard-sided coolers keep your stuff colder for longer in a heavy-duty product.  We've been using a variety of the more traditional non-rotomolded plastic coolers from Igloo for years and also a rotomolded Pelican Elite for at least the last 3 years.  A Yeti Tundra 45 showed up under the Christmas tree this year, so I thought I'd take the opportunity to compare the Yeti with a traditional Igloo and the Pelican and then perform a non-scientific ice retention challenge between all three.  Keep reading to learn a bit about each of the coolers and see the results.  Let me put a little disclaimer right here up front: Each of these coolers isn't necessarily a great direct competitor for the others since they have widely varying capacities and prices, but they're what I've got on-hand for a test, so play along. 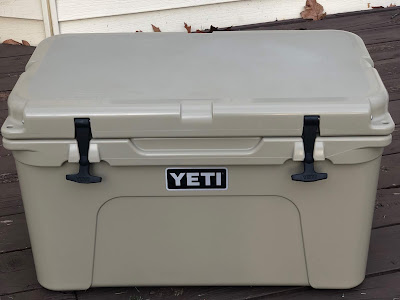 The YETI Tundra 45 is billed as a tough premium cooler and happens to be YETI's best-seller from what I can tell. For a retail price of $299.99, YETI will sell you one in your choice of four colors (Mine is "Desert Tan").  I suppose the most important feature of this or any cooler is the insulation.  The Tundra 45 has up to two inches of insulation in the sidewalls and lid.  While it is not nearly as  lightweight as a traditional plastic Igloo, I was actually expecting the Tundra 45 to feel heavier than it's 23 pound dry weight implies.  A couple other features I really like are the drain plug (every cooler should have one!) and rubber non-slip feet which are a necessity when you're keeping the cooler in a bouncy, open, and potentially wet boat cockpit.  YETI's "T-Rex" rubber lid latches work well and feel robust enough to last many seasons.  The lid gasket and included basket are also nice touches.  And if you really want to trick-out your cooler, YETI will be happy to sell you a variety of custom fit accessories such as an exterior beverage holder, dividers, SeaDek non-skid toppers, a rod holder, a tie-down kit, and a security lock/cable/bracket to protect your pricey cooler from theft. 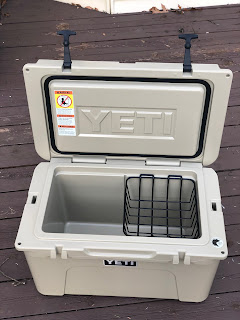 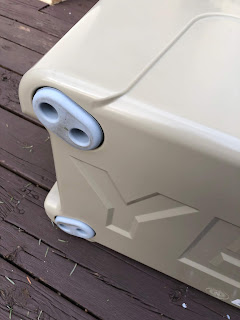 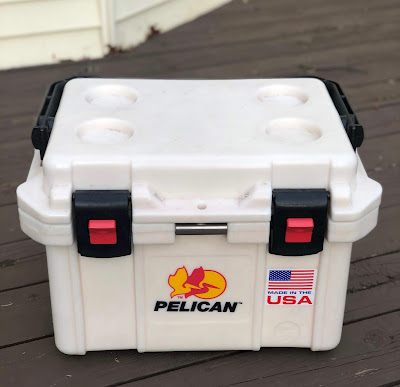 The Pelican 20QT Elite is an absolute tank of a rotomolded cooler.  It's capacity (and price) is less than half of the YETI Tundra 45, but the weight is still a beefy 16 pounds.  Oddly, it's called the "20QT Elite" but Pelican lists the volume at 19 quarts.  I guess they like to round up just like many boat manufacturers do.  It also has nice non-slip rubber feet and thick sidewall and lid insulation, but the rest of it's features and construction differs.  A major drawback for me is the lack of a drain plug.  Nobody wants to tip the cooler over for draining and disturb the contents and deal with spilling water, regardless of it's small capacity.  The latches on the Pelican are hard plastic with release buttons, which work well and seem rugged.  As I mentioned in the opening, I've had this cooler for several years and haven't had any issues with the latches breaking or not closing securely.  There's also a nice flip-up handle for one-handed lugging, although the molded side handles are much easier to use since this thing is heavy.  Another feature I really like is the built-in metal bottle opener.  As with the YETI, Pelican also has a decent variety of accessories that fit this cooler.  Lastly, Pelican backs their Elite coolers with a lifetime warranty as compared to YETI's 5 year warranty on Tundra coolers. 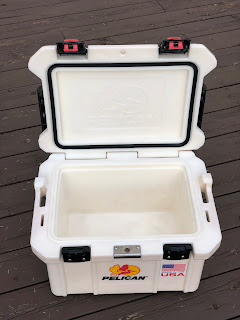 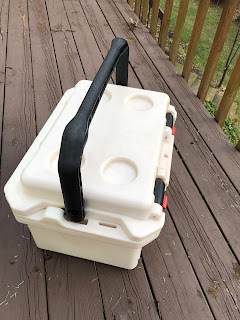 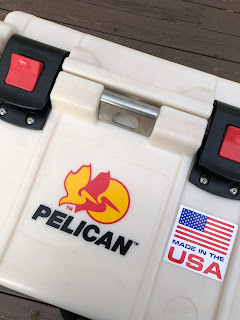 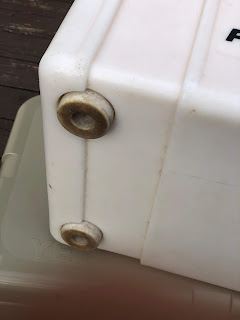 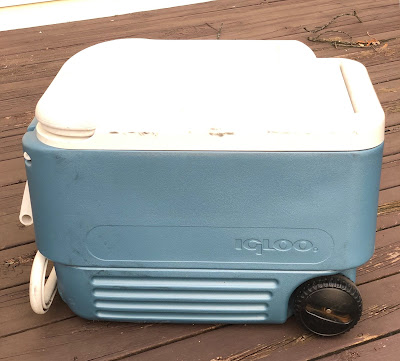 The Igloo Maxcold series is probably familiar to you and you may even own one (or more).  These are the affordable, plastic workhorses of tailgating and backyard barbecues.  I suspect the reason being is that they work fairly-well and don't cost an arm and a leg.  This particular model lacks a drain plug (Ugh!!) but does feature built-in wheels for easy transport.  The handles are plastic, which can be a weakness if you're moving it around a lot.  I broke a handle on ours last year under what I consider normal use.  The lid opens along the length of the cooler, which isn't necessarily a plus or minus for me, but I don't like that it's not affixed to the cooler by any means other than some molded nubs in the plastic.  This means the lid comes completely off just about every time you open it.  Why not at least include another cheap plastic hinge to keep this from happening?

Cooler Ice Test Results
Alright, enough with the general specs and observations, let's get on with the ice test!  As I mentioned above, the three coolers discussed in this review aren't necessarily natural rivals nor fit for direct comparison since they vary so widely in capacity and price.  However, they happen to be the three coolers I own and will use most frequently, so they'll be the contestants in the ice retention challenge.

The purpose of my test is essentially to see which cooler can retain ice the longest.  However, my methods are by no means scientific and contain room for future improvement.  In any case, the following is what I did to test ice retention.  I used a bag of store bought ice for each cooler.  The YETI got a 20 lbs bag (it actually weighed 23.4 lbs when purchased) because of it's larger volume and the Pelican and Igloo each got a 7 lbs bag (8.9 lbs and 9.3 lbs respectively, when purchased) because they couldn't hold the larger bag.  I kept each cooler in my basement utility room during the test, which had a mostly constant temperature of 70 degrees Fahrenheit.  I then left the coolers closed and undisturbed except for periodic check-ups to weigh the remaining ice in each bag.  Below are my results.

What do the above results show?  Well, it's difficult to definitely say, but I'm very pleased with the performance of the YETI.  In fact, as of over 100 hours after initially adding ice to the YETI, there's still over 50% remaining as I'm writing this post.  I'll admit, while the conditions in my basement remained constant throughout the test for all three coolers, those conditions were not demanding and not indicative of the conditions these coolers will see while I'm using them.  For example, a constant ambient temperature of 70 degrees with zero sun and wind exposure isn't going to happen in the back of my cockpit.  And neither is it realistic that these coolers won't be opened many times each day by my kids, guests, and myself to grab a drink.  So, my basement environment represents to me the very best case scenario for cooler performance and I can expect much less ice retention in real world use.

I'm also not quite sure what to make of the results from each cooler relative to the others since cooler volume varies greatly and the initial volume of ice was much greater for the YETI.  If the YETI had a similar ~9 lbs of initial ice, would it have fared as well or would the increased empty air space in the cooler been an equalizer?  I honestly don't know.  What I can say is that anecdotally, I've always been a bit underwhelmed by the Pelican's real world ice retention as I've used it over the last several years.  I always thought for the price and weight, it should perform better and so seeing it's results in this test aren't a surprise.  Seeing the ~$50 Igloo keep pace with the Pelican was a bit of a surprise.

Like many purchases, the decision about which cooler to purchase comes down to performance, features, and price.  Given that we now have an ice maker onboard our boat, performance is less of a factor for me, although it's still important.  Durability is important to me since I've replaced broken handles, hinges, and lid latches on a couple different Igloo coolers over the years.  We also keep our cooler in a location in the cockpit where it does double duty as a step onto the gunwale.  The Igloo we've been keeping there cracked in multiple spots last season because of this.  I'm confident the YETI and the Pelican can't be cracked by simply stepping on them.  I've already mentioned how important a drain plug is to me, and neither the Pelican nor the Igloo have one.  So it comes down to deciding if spending $300 on a YETI Tundra 45 is worth it.  For us the answer is yes.  This cooler should last a very long time and perform well doing it.  Should you rush out and buy one?  I can't answer that, particularly since there are several other brands that are now direct competitors for the YETI Tundra series.

While putting this blog post together and researching coolers, I incidentally came across some information for maximizing ice retention and cooler performance.  In fact, all three manufacturers provide some tips.  Here's a few of my favorites:

1) Pre-chill your cooler.  If you're loading a cooler that's already been sitting in the sun, it's gonna take a fair bit of the initial ice load just to cool the interior, let alone any items you want to keep cold. Pre-chilling seems obvious and is perhaps not always practical, but it makes a big difference.

3) Keep air space to a minimum.  The more air you have inside the cooler, the more ice you'll need to chill it.  Air also carries off the cold whenever your cooler is opened, so having less of it is a good thing.  Maximize ice retention by filling air space with extra ice, towels, or just about anything you can.

Have an opinion on the best coolers for boating or simply want to share your experience?  Feel free to leave a comment below.