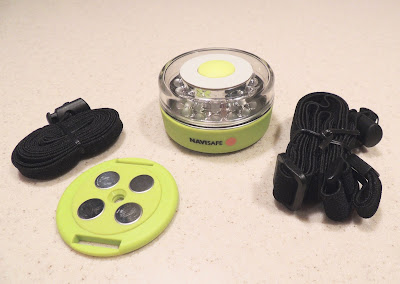 One of the great joys of owning a boat is anchoring out, whether it be for one night, one week or some portion of a lifetime. I love the -isms of life on the hook: escapism, minimalism, hedonism, tuism. Yes, tuism is a real word. It's the theory that individuals have a second or other self. So I think I'm using it correctly when I say I'm a different person at anchor. Life is slower. My mind is clearer. It's here that I live in the moment.

But I digress, so let's get to the point of this post, which is to review an option for a portable, battery powered anchor light.

Obviously, we've got a masthead anchor light on our sailboat, but it's the only remaining bulb on the boat that's not LED. This bothers me. I'm a big proponent of LED bulbs on boats because of their energy efficiency and long life. And I admit to neurotically losing a bit of sleep at night thinking about the incandescent bulb eating up juice from the house battery bank. I know the bank is plenty big enough to endure 10-hours of anchor light use, but still...

Unfortunately, the stock anchor light fixture from Catalina doesn't have a dome large enough to accept an LED bulb and I haven't gotten around to upgrading to an entirely new fixture. So I've been experimenting with alternative anchor lights instead. My go-to portable anchor light the last couple of years has been the Carmanah M550, a really high quality solar powered LED that has a remote control and up to 3 nautical miles of visibility. The downside to recommending the M550 is the high cost and limited availability. Of course the ultra affordable option is a solar garden light available for just a few bucks, but the build quality is atrocious and they certainly don't meet USCG requirements for a safe, legal anchor light.

I wasn't looking to replace the M550, but it now has competition. I recently picked up a Navi Light 360 from NaviSafe. The gear I review here at SailFarLiveFree is stuff we honestly like and use on our sailboat. Having said that, occasionally there's some gear that we really love - gear that stands above the rest. The NaviSafe Navi Light 360 is one of my all-time favorites.

But before I gush too much about it's features, let me tell you what I don't like. I don't like that's it's powered by 3 AAA batteries. It would be better if it had a rechargeable Ni-Cd battery so I could simply plug it in during the day for a recharge instead of needing to carry extra AAA's. Or better yet, I'd much prefer a built-in solar charging option like the M550 has, or at least a USB power port so I could charge it with my 15 watt panel. The trade-off with having built-in solar is, of course, that the overall size of the light would need to increase and as it is, the NaviSafe is about half the size and weight of the M550. Which brings me to the NaviSafe's first advantage, it's small and compact - about the size of a cupcake. For comparison sake, the M550 is more like the size of a hamburger and bun.

What else do I like about the NaviSafe? Well, the basics are good: 360 degrees of very bright LED visibility with a 2 nautical mile range and USCG approval. It also meets ABYC A-16 nav light standards.


And then there are bonus features that make it outstanding. First, it's fully waterproof to 65 feet and floats with the light facing up, so it can double as a rescue/MOB light. There's also a plastic ring on the top of the light that glows for 8 hours with just 10 minutes of daylight charging. This is useful for finding the NaviSafe in the dark before the LEDs are turned on.

Mounting options are plenty and begin with a double magnet base. The base plate separates from the rest of the light via magnets, so you can leave the base plate mounted (either temporarily or permanently) while stowing the light below decks when it's not needed. The base plate itself can be mounted with any of the following, all of which are included: an adjustable Velcro strap, an adjustable lanyard, or a stainless steel screw. I'll probably most often use the Velcro strap around the end of the boom since the strap is big enough to go around the furled sail and sail cover - Nice! I'm also planning to use the NaviSafe as the all-around white light on our dinghy, so portability and mounting options are a clear benefit.

The light itself is actually comprised of 16 separate LEDs positioned in a circle so they provide 360 degrees of visibility when they are all lit. With all 16 LEDs on, the 3 AAA batteries will provide 13-15 hours of operation. While 13 hours is long enough for a night on the hook and will be just fine for cruisers who use the NaviSafe as a back-up for their masthead hardwired anchor light, it will mean a lot of battery changing for those who will use this as an anchor light more frequently, which is why I'd prefer a rechargeable Ni-Cd battery.

To sum things up, I think the Navi Light 360 should be in every cruisers gear bag. It's an excellent back-up anchor light that can also function just as well as a MOB rescue light or simply an extra moveable cabin light. It's not the perfect solution for a full-time anchor light because of the battery usage (I like the Carmanah better for this singular purpose), but it does everything else extremely well.

Want to get one? Use our affiliate link (At no extra cost to you!) and help support SFLF: