Three New Modern Cruising Sailboats Unlike Any Others

"Always remember that you are absolutely unique. Just like everyone else." - Margaret Mead

Sailors are often traditionalists and sailboats are often traditional in design. I'm perfectly ok with that. In fact, many of my favorite designs are quite traditional, often to a fault. But there are a few new cruising sailboats that have caught my eye and even made me scratch my head lately. It must be boat show season too, because I'm suddenly feeling like a sailing rag editor.

Broadblue Rapier 550
At first glance, the Rapier 550 looks similar to many other large modern cruising cats, but trust me, this one is truly unlike any other. Look just a bit closer at the exterior and you'll see sharp reverse bows. This boat actually appears to have a shorter length-on-deck than the waterline length. You'll also probably notice a smallish cockpit with a large slider door into the main cabin. What you'll notice is conspicuously absent from the exterior is much of the running rigging. 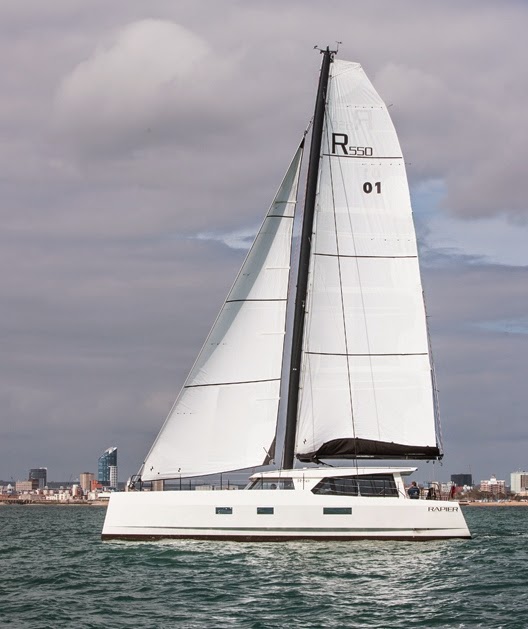 Why is it unlike any other cruising sailboat? The last sentence above should have tipped you off. All of the Rapier 550's control lines are lead to a carbon fiber compression post in the center of the main cabin. Jib sheets, traveler lines and all other sail control lines are found here on the inside and are controlled via electronic switches and winches. There's even an onboard computer system that can be set with pre-determined limits so the boat is automatically de-powered (sails let out, etc.) if the conditions become too much. 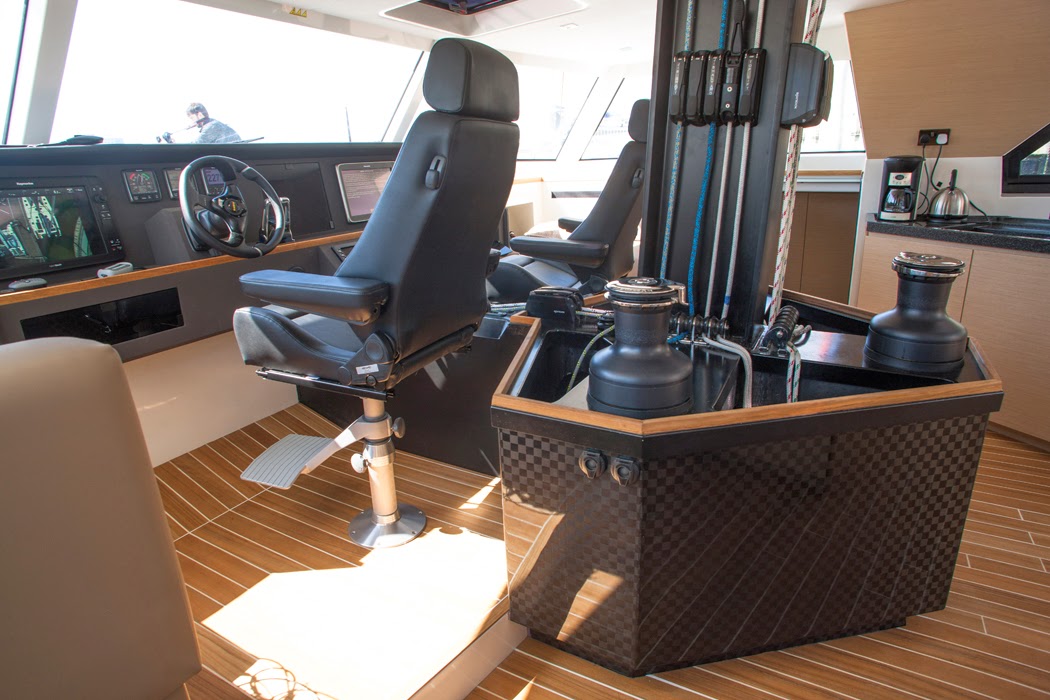 Take a look at that "helm". Is that the helm of a cruising sailboat or the driver's seat of an auto racing video game? The small Momo wheel might be cool on an 80's Supra or trendy on a souped-up Civic, but the look doesn't seem right for a sailboat. Tacking simply involves turning the wheel and pushing a button. Easy, but it barely qualifies as sailing. Toby Hodges from Yachting World said the boat felt a bit disconnected and foreign under sail. I haven't been aboard a Rapier 550, but that description seems to fit what I see.

Broadblue bills the Rapier 550 as "The Future of Performance Cruising", but to me it seems more like something a powerboater may opt for if they had a desire to cruise fast and far on a big budget. Interesting design concept, but I have a feeling that most sailors with this budget and desire for a 55-foot cat would opt for the Gunboat 55 if they want speed, and perhaps a Lagoon 560 S2 for max comfort in a production cat.

Varianta 37
Apple's iPhone has always been one of the top performing smartphones on the market. It's always sold well too, but that doesn't mean they're affordable for everyone. Enter the iPhone 5C, a model that performs nearly on par with the 5/5s, but adds value by taking away a few features like the all-alumnium body to hit a price point and meet the needs of a slightly different market. That's kind of how I think of the Varianta 37.


Based on the hull molds of the Hanse 375, the Varianta 37 is a somewhat stripped down boat that still offers good performance and most of the space and amenities required for cruising. The benefit to this approach is a new 37-footer with a Hanse pedigree/hull for a sailaway price of $132k (more for a model delivered to the U.S.). For perspective, a new Catalina 385 costs about $215k, a Bavaria 37 is about $197k, the new Hunter 37 is north of $175k, and the Jeanneau Sun Odyssey 379 is somewhere between $175k-$245k, depending on options.

Why is it unlike any other cruising sailboat? "Simple" and "agile" are words that describe the Varianta. She's also a bit plain looking with the lack of a factory cove stripe or any other hull graphics. Not only has the cove stripe been removed, but there must be other "stuff" taken off too, because the displacement is about 1,000 pounds less than the Hanse 375 she's based on. Joinery work in the cabin is at a bare minimum and the look is very white and spartan...like an Ikea showroom. In fact, you can even opt for bean bag style settees in place of traditional foam cushions in the salon. Most systems are as simple as they can possibly be while still maintaining functionality.


So the feature that makes the Varianta 37 unique is actually a lack of features found on more expensive boats. But don't confuse this lack of features and a lower price point with shoddy workmanship or questionable build quality. SAIL Magazine and Yachting World both report that the boat seems structurally robust and at least up to Hanse's normal reputation in the production sailboat world. While I'm guessing the Varianta will probably do well in the charter market and as a trainer for sailing schools, I'm willing to bet she'll also become a a decent option for budget minded cruisers who want a new boat, but don't want to spend the ~$200k that a 37-footer typically commands. Kinda reminds me of the kit boats that were popular with cruisers in the 1970's.

Neel 45
The popularity of multihulls among cruisers (and bareboat charters) is validated by simply scanning any popular anchorage in the Caribbean. For many, the allure of vast cabin spaces, multihull stability and the potential for monohull-besting performance is tough to pass up. Still, multihulls, whether they be catamarans or trimarans, have always seemed a bit radical.

Now along comes a large cruising trimaran that pushes the edge of what is considered radical, even by traditional multihull standards. The Neel 45 is the offspring of Eric Bruneel, former general manager for cruising catamaran giant Fountain-Pajot.

Why is it unlike any other cruising sailboat? First, this is a legitimate world cruising trimaran. How many of those do you know of? Then, there's performance. The Neel 45 reportedly makes 10+ knots easily on most points of sail and averaged 230NM days on a recent transatlantic crossing. Next is the very unique look and layout. This isn't your typical v-berth forward, salon amidships and galley aft arrangement found on many cruisers.


The Neel 45 is a unique boat that I'm guessing will require a unique buyer. But if you value speed, and want something different from a name with a reputation (Eric Bruneel), then this might be your boat. Want to learn more? Visit Neel Trimarans.

So there you have it: a monohull, a cat, and a trimaran all breaking new ground in the cruising sailboat realm. Cool boats, but I'll still take a Hans Christian 33t and a nice starter fund for the cruising kitty.