"Maps are an instant adventure for my mind." -Me

I've always been captivated by maps and charts, which probably explains why I have no less than 4 chart plotter apps on my iPad at any given time. I can be laying in bed, or sitting at my desk gazing at a map and my mind will be somewhere on the other side of the world. I suppose to some people maps are just one dimensional lines on a paper, but to me they represent instant adventure and journey.

While I still prefer tracing my finger along the latitude lines on a paper chart, the digital age has brought with it some pretty cool treasures for mapoholics. I can spend hours spinning the globe in Google Earth...Zooming in to the tiniest offshore islands I can find...Measuring the thousands of miles of open ocean between iconic landfalls...Examining the silouhettes of shallow reefs. Sometimes I run across really interesting features in an otherwise palette of deep blues. Take for example my 3 favorite nautical features from Google Earth:

1) The Great Blue Hole in Belize: The islands and reefs of Belize are fascinating and likely on a lot of cruising sailors' must-see list. One of the highlights is in the center of Lighthouse Reef, an atoll about 50 miles from mainland Belize. The Great Blue Hole is a circular limestone sinkhole that measures nearly 1,000 feet across and 400 feet deep. Hailed as one of the world's best dive sites in the world by Jacques Cousteau, the walls of the Great Blue Hole are pitched at 90 degrees for nearly 130 feet before opening into the remnants of a freshwater cave complete with stalactites. It's difficult to find on Google Earth (without using the search function), but quite impressive when viewed up close.


2) Mauritius Underwater Waterfall: The Republic of Mauritius in the Indian Ocean is isolated at sea nearly 1,200 miles off the southeast coast of the African continent. With an interesting political background and biodiversity that rivals almost any other island nation (last known home of the Dodo bird until its extinction in 1681), Mauritius has plenty to discover. But for an amazing illusion, point your Google Earth cursor towards the island's southwestern tip and look for what appears to be an underwater waterfall.


The illusion is actually sand and silt being carried away from Mauritius by strong currents. The ocean floor drops away steeply, giving aerial photos and satellite imagery an amazing perspective.

3) S.S. Jassim on Wingate Reef: In 2003, a Bolivian passenger ferry ran aground in the Red Sea offshore from Sudan. The 264-foot ship is certainly not the only shipwreck visible in Google Earth (there are many), but it is likely one of the most easily seen and largest. Want to try and find it? Find the Port of Sudan in Google Earth and then starting hunting offshore. The United Nations estimates there more than 3 million shipwrecks in the oceans of the world. The National Oceanic and Atmospheric Administration (NOAA) is more conservative with an estimate of 1 million.  No matter the number of wrecks, Mel Fisher's Treasures in Key West estimates that there's some $60 billion in treasure still aboard all those shipwrecks, so what are you waiting for? Launch Google Earth and start searching! 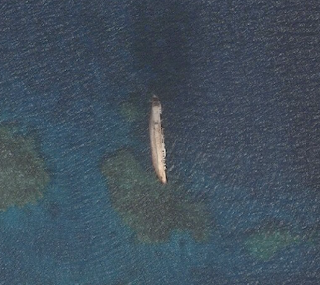