"Odysseus spread his sail...while he sat and guided the raft skillfully by means of the rudder. He never closed his eyes, but kept them fixed on the Pleiades, on late-setting Bootes, and on the Bear...which turns round and round where it is, facing Orion, and alone never dipping into the stream of Oceanus - for Calypso had told him to keep this to his left. Days seven and ten did he sail over the sea..."
-Homer from The Odyssey, 700 BC

My sailor's cap comes off to those of you who know celestial navigation and can competently find your way across oceans with little more than a sextant. I'd like to learn to navigate by the sun and the night sky and have my nav station uncluttered by wires and spent batteries, but until that day I'll be relying on electronics as my main means of navigating.

Mobile devices have rapidly leveled the playing field for the marine navigation market. It wasn't long ago that color LCD GPS chartplotters cost thousands of dollars to purchase, and then perhaps a hundred or two more to install if you're not handy or inclined to do the work yourself. Actually, chartplotters can still cost several thousand, but there are more affordable alternatives for those that don't need a fixed mount display or who simply want a handy back-up.

I am, of course, referring to mobile phones and tablets when I say the playing field has been leveled. We regularly use our iPhones and iPad for coastal navigation instead of firing up the Garmin. I find that touch screens are excellent for digital chartplotting and have made the direction pad on the Garmin feel antiquated and cumbersome. 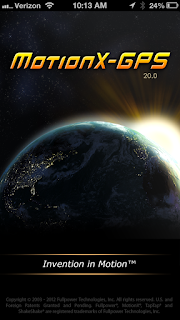 What follows is my MotionX GPS app review, one of the most affordable and effective marine navigation apps I've come across.  First, let's get the specs for MotionX GPS out of the way:

So how well does MotionX GPS work?

I'm pleased to report that it functions as well as the Navionics app (see the review here), which costs considerably more.  MotionX GPS allows you to easily see your position either by coordinates on an information display screen or on a NOAA nautical chart. What I really like is that you can also turn on several other maps/chart layers, including road, terrain, satellite, and hybrid from several sources (MotionX proprietary, Bing, Apple). This feature allows you to use this app in the car or on the trail if you like to hike/bike.

The chart display features nicely detailed NOAA charts and shows your heading, speed, and position at the top of the screen. Here you can see the breakwater at Muskegon in both Bing satellite view and on a NOAA nautical chart: 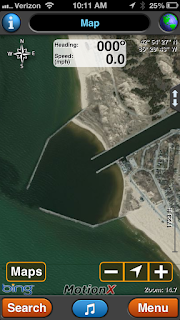 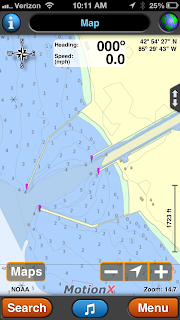 Here's a look at the compass page and the position display page: 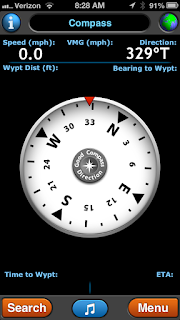 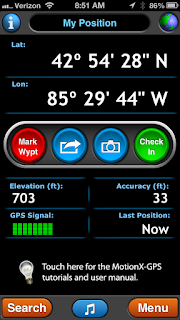 And here's a look at the search wheel and MotionX topo terrain maps for hiking/biking and landlubbers: 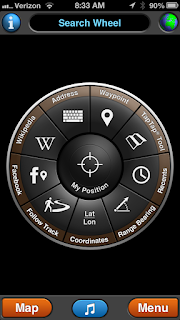 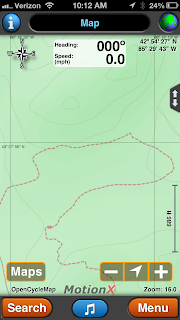 All maps/charts can be cached and stored so you can access them without an internet connection and without data fees once you have them on your device. MotionX allows you to save up to 500 waypoints and 101 tracks. Navigation is fairly simple and can be done by choosing a waypoint, address or some other destination from the search menu. The TapTap Tool is used to create and edit waypoints. It took me a bit of playing around with the tool to figure it out, but it works fine once you get the hang of it.

Navigation is only available as point to point, meaning there's no route creation (at least as far as I can tell), so you'll have to interact with the app as you navigate from waypoint to waypoint on passages with multiple waypoints. You also won't be able to integrate this app with your autopilot like you can with NMEA chartplotters, but so far I'm not aware of any nav app on a mobile device that can do this.

Overall, I really like MotionX GPS for it's simplicity, functionality, and versatility. Navionics charts are more graphically appealing and include the ability to overlay weather (wind) data, but they also cost more ($9.99 for iPhone, $49.99 for iPad). If you're looking for navigation app to use on your iOS device while aboard the boat, I highly recommend MotionX GPS.