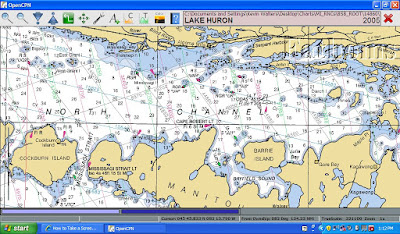 The North Channel is a sailor's paradise on Lake Huron in the Canadian province of Ontario.  The channel is overflowing with picturesque islands, crystal clear blue waters and superb wilderness.  This cruising area should be on every Great Lakes sailor's short list of top destination.

In addition to the previously mentioned research and conversations, we'll be attending a couple of North Channel-specific seminars at the upcoming Strictly Sail sailboat show in Chicago (Jan. 31 &31).  The seminars are titled "Cruising Lake Huron's Fabulous North Channel" and "From Lake Michigan to the North Channel".  Hopefully the seminars will help to solidify a decision and answer some of the questions we have.

Logistically speaking, the North Channel is about 260 miles one way from Grand Haven.  This is likely a 4-6 day sail for our crew, pending weather.  Our original loop was to cover about 650-700 miles under sail.  Adding the North Channel will add roughly an additional ~235 miles if you consider it as a side trip from Mackinac Island.  That would mean total miles under the keel for the entire cruise could be somewhere in the 900-1000 mile range.  That's some serious sailing!
Great Lakes sailing Lake Michigan North Channel