I love electronic gear that doesn't eat into my sailboat's battery bank. Add in three-in-one versatility and an IPX5 shock/water resistance rating and you've potentially got a nice piece of cruising tech. Those are the features that the Buckshot Pro Bluetooth speaker/powerbank/flashlight from Outdoor Tech possesses and as their website says, this is "stuff you probably want".

I first became interested in the Buckshot Pro as a small Bluetooth speaker that could handle wet rides from the mothership to the beach and back. Its small size (about 4.125"L w/ a 1.75" diameter) allows it to fit in a pocket, a cup holder or mount to stanchions and the bimini frame using the included rubber mounting strap. I routinely get over 10 hours of play time at 3/4 volume, which is quite good considering the size. Sound quality isn't stellar, but it's still very respectable, again considering the speaker size. Most of the time the sound is on par with other small to medium Bluetooth speakers I've used (the bigger Fugoo, for instance), but low end bass and max volume trails a bit behind.  The speakers' output is on one end of the device, as opposed to omnidirectional, so you'll need to be mindful of which direction it's pointed when playing music.


What I wasn't expecting was the usefulness of the flashlight accessory and the ability to recharge other devices via USB connectivity. The flashlight accessory screws onto one end of the Buckshot Pro and provides three variations of lighting. The first is a lamp setting that could be used in the cockpit or at the salon dinette for an evening game of cards. Second is a flashlight setting that provides surprisingly bright LED illumination on two brightness settings. The third option is to use the light as a sort of strobe or distress light in the flash setting.


As a powerbank, the Buckshot Pro shares its 2600 mAh battery to charge connected devices such as an iPhone or iPad. The charge output is 5V (max 700 mAh). My iPhone 6 Plus has a 2915 mAh battery, so I can't recharge it to 100% from the Buckshot Pro, but it does work nicely if we're in a pinch to get a charge while away from the sailboat on the dinghy or ashore.

So what's my overall impression? The Buckshot Pro is a really useful, mobile speaker that has added functionality for cruisers with it's powerbank and flashlight. I'm guessing most sailors will give up a little sound quality to have portability, water resistance and other functions that we all also need from time to time while cruising. And yes, this is stuff you probably do indeed want! 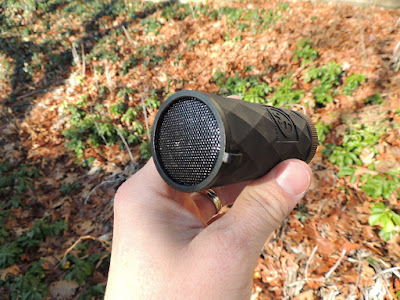