“You have brains in your head. You have feet in your shoes. You can steer yourself in any direction you choose. You’re on your own, and you know what you know. And you are the guy who’ll decide where to go.” –Dr. Seuss
You may have heard of Musto. They’re an England based company that focuses on technical clothing and their offshore sailing brand. But do you know Musto’s backstory?
Keith Musto arrived in Tokyo as an unlikely choice for the British Olympic sailing squad of 1964. He was too light and short for the heavyweight Flying Dutchman boat he was competing in. Keith and his crew, Tony Morgan, quickly realized that their only chance of winning gold was to be fitter than their opponents. So they did the unthinkable. Every day, Christmas included, they did fitness training. Fellow competitors derided their training as unsporting, but a new breed of sailors was emerging. They were athletes.
Keith recalls, "We sailed in Guernsey sweaters and old flannel trousers for years. You got wet and you accepted it. But, as we progressed up the ladder in terms of competition, we realized that this was a problem that needed to be solved.” So, after taking the sailing world by storm and winning silver in Tokyo (missing out on gold by ‘nanoseconds’), he set about producing technical sailing apparel.

An old WWII prisoner of war hut in Essex served as the beginning of everything. Keith started out making sails with Edward Hyde under Musto & Hyde Sails. But Keith soon shifted his focus to constructing technical sailing clothing. He quickly taught himself all the basics of manufacturing clothes, paying his wife with a Mars bar a day to machine and do all of the typing. Money was tight.
Then in 1980, Keith split from Musto & Hyde. His team quickly became the technical manufacturer and wholesaler of the best sailing kit available. It was specialist clothing worn and endorsed by the world’s most celebrated sailors. The red silhouette of Keith’s Olympic Flying Dutchman boat was emblazoned on the sailing apparel. MUSTO was born.
That’s a story and a dream I can appreciate. I love companies that are built on their owner’s true passions. That sounds like a no-brainer, but then just think about all of today’s products that are simply put to market to fill a niche and make a buck, rather than born of someone’s hard earned experiences.
I’ve been vaguely familiar with Musto as a brand for a number of years now, but my first experience with any of their products is their Orson Drift deck shoes. While these shoes are indeed a Musto product, Clarks (also from England) is a collaborator that brings their reputation for superior fit and comfort in footwear to Musto’s sailing apparel acumen. For what it’s worth, I can tell you the combo is a success. 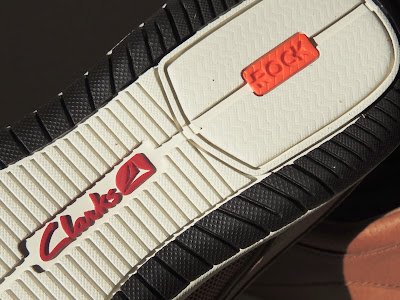 These shoes have an insanely comfortable insole, thanks to two components; a sheepskin lining and a footbed with small, round plastic/rubber nodes. The initial feeling is that of a subtle foot massage. As you wear the shoe for more than a couple of minutes, your foot begins to ignore the nodes and their massaging, but the fit is still pleasant and support. I’m guessing this type of footbed is spawned from Clarks influence. I've also found a slight heal irritation on my left foot. I'm hoping this disappears as I continue to wear them.
So what about Musto? Did they give the Orson Drift any characteristics of a really good deck shoe? Well, I’m told the leather (which is very soft compared to my Sperry Billfish shoes) is salt water resistant, though I’ve only splashed mine with freshwater thus far. This is good since Keith Musto reminds us that in sailing we’re going to get wet and we need to accept it. The eyelets for the laces are rust resistant and the rubber sole is siped to resist slipping. Those features check most of the “must-have” boxes for sailing. There’s also drainage (Musto calls it “aquaDX Technology”) near the midfoot area on both the inside and outside edges.
I won’t pretend to tell you what style you should look for in a sailing shoe, but I will say that the Orson Drift deck shoes are subdued. The overall shape says “classic boat shoe” to my eye, but there are hints at something sportier with a bit of rubberized accents on the heel and around the drainage areas. Musto provides both leather and fabric laces in the box, so you can chose between the two. If you still want to add some flair to these shoes, try them navy or dark gray. 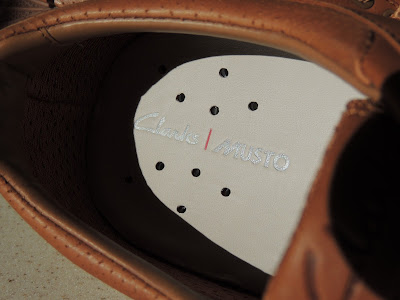 Are they worth the $160 retail price? Quality leather and sheepskin linings don’t often come cheap. I haven’t had them long enough to comment on overall durability, but I can say they have the feel and build (stitching, seams, etc.) of a high end shoe. They’re also much less ubiquitous than Sperry’s and Sebago’s, at least on this side of the Atlantic.

Can't get enough of sailing shoe reviews? Try the others we've written:

A Sailor's Sole - The Original Reviews