Can I get a radio check? A review of VHF radio protocols

Now that spring has finally sprung and more sailors are back on the water, I thought it would be a good time to review some VHF radio protocols, if for no other reason than to keep my own skipper skills up to snuff. 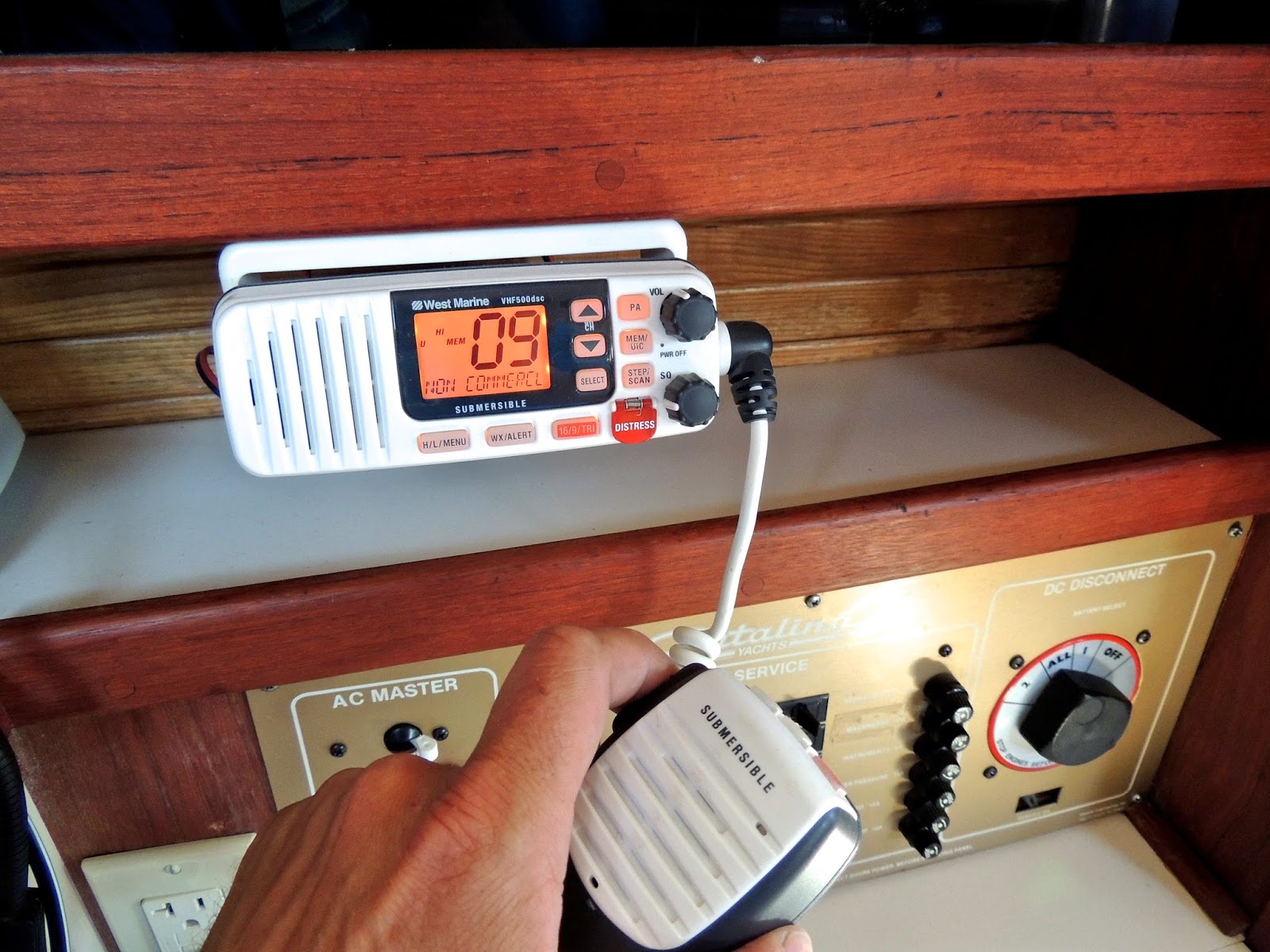 But first I’ll start with a couple of VHF “conversations” from my recent Great Lakes cruising memories…
The seas had built to snotty 3 and 4 footers under the cloak of a thick fog as we departed Charlevoix bound for Beaver Island in northern Lake Michigan. Even when the fog did begin to lift, the visibility from our little sailboat was still obscured by rain showers. I knew there weren’t likely to be many other recreational boaters out beyond a mile or so of shore on a weekday with crumby weather, but I also knew we’d be crossing paths with the Beaver Island ferry Emerald Isle at some point during our 30 mile sail.  Sure enough, we heard her engines through the fog astern well before we actually laid eyes on her. I hailed the ferry via VHF channel 16 to make sure he saw us. The friendly captain confirmed that we were on their radar and said he’d give us a wide margin as he passed to our port. We don’t have radar or AIS so we generally try to avoid sailing in low visibility, but the VHF helped calm our nerves on the passage to Beaver Island.
And the second memorable “conversation”…
As we sailed north of Cockburn Island and approached Mississagi Strait in Lake Huron’s North Channel, we spotted a freighter between us and the shoreline.  It was difficult to make out the ship's heading through the thin fog, but was easy to tell we were getting too close for comfort.  I got on the VHF and hailed the "freighter just north of Cockburn Island outside of Mississagi Strait".  After three attempts (one on 16, one on 9 then another on 16) a gruff voice finally responded.  I asked for his heading and for confirmation that he saw us.  The captain responded with "We're not headed anywhere...we're at anchor.  And yes, we have you on radar." By the tone in his voice, I’m pretty sure he also wanted to add “You stupid f-ing blowboater!” to the end of his transmission.  In any case, we now knew it was safe to continue our course towards Meldrum Bay.
I think it’s easy to forget about the importance of a VHF radio on a sailboat. Many of us have a fixed mount VHF down below at the nav station, so there’s not necessarily a visual reminder to monitor channel 16 (156.800 MHz) at all times whenever the radio is not being used to communicate (Remember – That’s a legal requirement!). A RAM mic at the helm or portable/handheld VHF makes it easier to have the radio in a convenient location. I’m getting in the habit of using our handheld in most situations and only fire up the fixed mount radio at the nav station if I need the extra range or happen to be below getting weather while at anchor or in a marina. 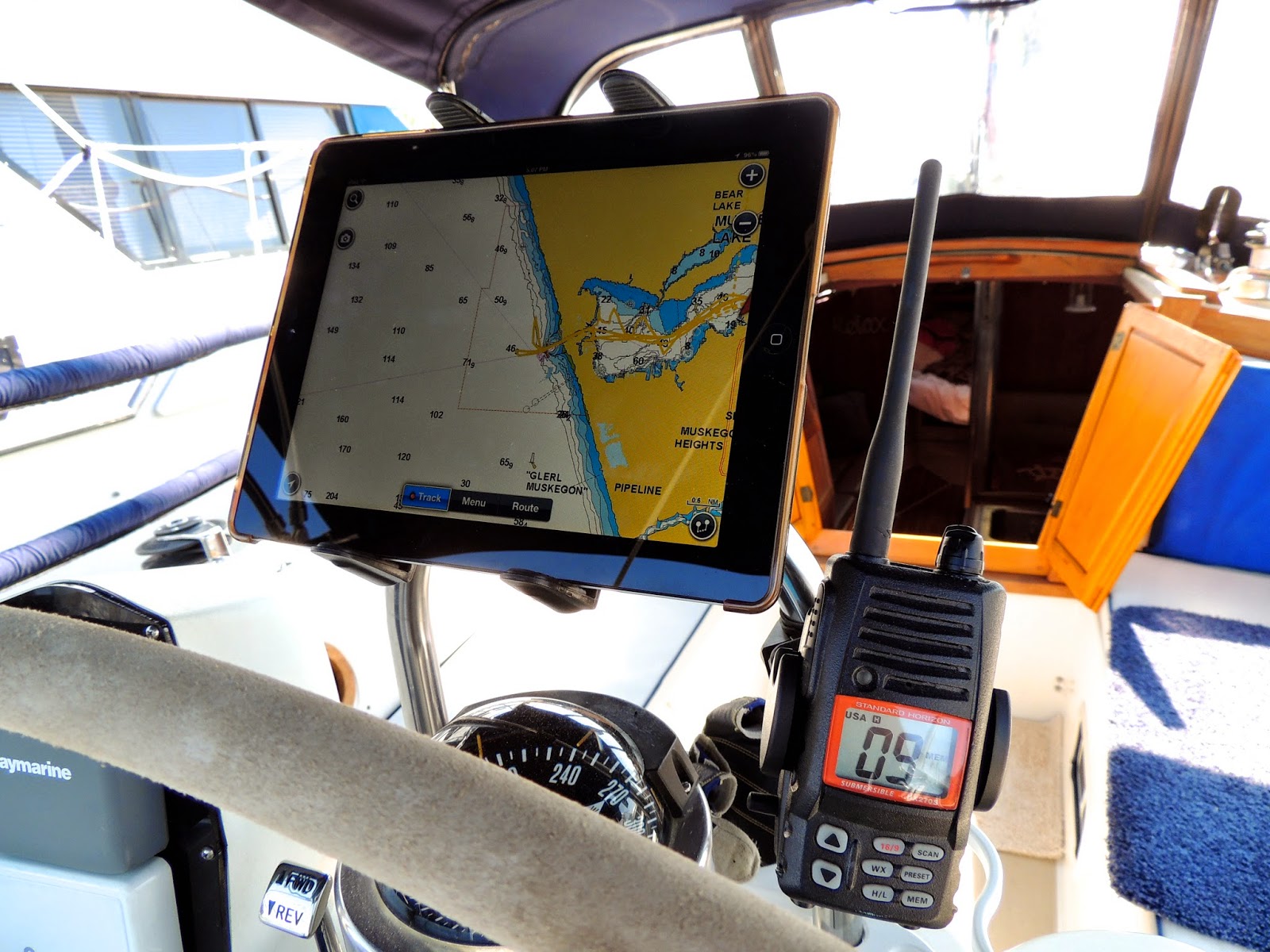 Let's start by taking a look at how to make a mayday call over VHF.
VHF Mayday protocols (adapted from the USCG’s Nav Center):
Tune to channel 16 if you’re radio is not already there.
A) Speak clearly and repeat “Mayday” three consecutive times.
B) Identify your vessel name by speaking it clearly three consecutive times followed by your call sign/registration number spoken once (if known).
C) Repeat “Mayday” one more time followed by the name of the vessel again.
D) Give the position of your vessel via latitude and longitude and approximate distance to a well-known landmark such as a nav-aid, island or port. Follow with information about course, speed and destination.
E) State the nature of the distress (sinking, fire, man overboard, etc.)
F) State the type of assistance desired (medical, towing, fire suppression, etc.)
G) State the number of persons onboard including yourself.
H) Include any additional necessary details which may help with rescue (color of boat, size of boat, etc.).
I) Finish the mayday call with the word “over” and wait for a response. If no response is given, repeat until someone acknowledges contact.

A) Mayday, mayday, mayday.
B) This is Maid of Plywood, Maid of Plywood, Maid of Plywood. MI1234.
C) Mayday, this is Maid of Plywood.
D) 32.405597N 64.771889W, three miles due north of Bermuda
E) Taking on water from an unidentified leak
F) Need pumps and possible life raft
G) Two adults, two children on onboard
H) Vessel is a blue sailboat with white sails
I) Over
So that’s the emergency procedure we should all know but hope to never use, but what about VHF protocols we should all know AND all use on a regular basis?
In the United States, VHF channel 9 is a supplementary calling channel for noncommercial boaters. If you’re trying to contact a recreational boat, you should initiate the contact on channel 9. Note however, it’s perfectly acceptable (and appropriate) to contact commercial vessels and the Coast Guard via channel 16. Let’s take a look at how a call between two recreational sailing vessels might sound:
Hot Ruddered Bum: Never Again II, Never Again II, this is Hot Ruddered Bum
Never Again II: Hot Ruddered Bum, this Never Again II. Reply channel 68 (or other appropriate working channel)
Hot Ruddered Bum: Sixty eight or Roger
Both boats should then switch to channel 68 and carry on with brief communications. Simple as that. But I hear this type of communication done incorrectly about as often as I hear it done correctly.
Below is the non-commercial VHF channel guide for the United States from the USCG. Recreational boaters should generally be using only channels listed as “non-commercial”, unless you can meet one of the uses listed from the USCG here.
Note – Channel 13 can be used to contact a ship when there is danger of a collision since all ships of 20m or greater are required to monitor channel 13 (in addition to channel 16) when operating in the U.S.
And did you know there are non-commercial channels (79A & 80A) specifically for use on the Great Lakes?
It's a good idea to keep some version of the information below at your nav station or somewhere near your VHF if you don't already have it memorized.
SailFarLiveFree, out!