Lions, Tigers, and Amphibear? Oh my!

I know what it's like to have a dream that burns inside of you. One that is there whether your body is sleeping or awake. I think many sailors and wannabe cruisers know that feeling. Mait Nilson is a dreamer who, I imagine, also sees the globe as an adventure map and reckons to circle it in his own very unique way.

On November 2, 2013, Mait plans to start his circumnavigation in Estonia. His initial sea crossing will be of the Strait of Gibraltar and later he'll attempt an Atlantic crossing from Senegal in Africa to Brazil in South America. While none of that may seem all that notable at first glance, Mait's journey becomes much more interesting when you consider his mode of transportation. He'll be using a Toyota Land Cruiser that he has heavily modified for both terrestrial and water use. He's named his dream machine "Amphibear". Check out the pictures below of Mait's Toyota adorned with foldable pontoons and hydraulically powered stern drives. In addition to the pontoons and stern drives, Mait has also outfitted Amphibear with a Ray Marine autopilot, VHF radio, FLIR night vision, and various safety features. 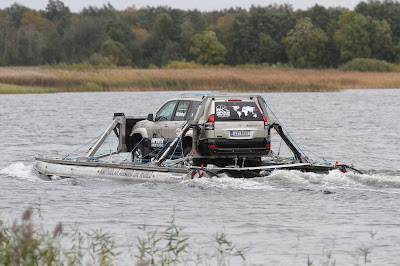 Land Cruisers are well known for long runs across barren and desolate expanses of land, but I'm guessing an ocean crossing is not on their resume at this point in history. Given the amount of scrutiny that many sailboat designs (and sailors) receive on internet forums when mentioned in connection with a bluewater passage, I'm guessing Mait's heard more than his fair share of skepticism, if not downright criticism for his chosen ride. In any case, I'll be following along on Mait's blog as he starts his journey next month. 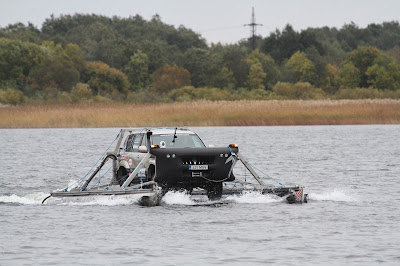