The following post is a reprint of an article of mine that was published in the July 2011 issue of SAIL Magazine.  Enjoy! 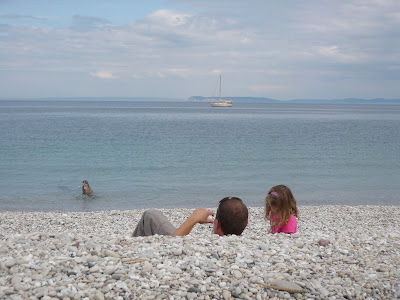 As we approached the southern end of South Manitou Island the wreck of the cargo ship Francisco Morazan came into view resting in shallow waters where she ran aground in 1960. My daughters had plenty of questions about how the wreck got there, what happened to the crew (all survived) and what was left inside. If we had more time we could have anchored nearby and took the dinghy and snorkeling gear over for a closer look. Earlier that morning we departed the harbor at Frankfort, Michigan bound for the quiet calm we hoped to find in the lee of South Manitou Island. The 26-mile passage provides a perfect daylong sail. Our southern approach to South Manitou Island included rounding Sleeping Bear Point and eventually crossing the busy shipping lane in Manitou Passage. Our two daughters played quietly below in the cabin while my wife and I scanned the horizon looking for freighters as the autopilot obediently steered our course to solitude.

South Manitou Island is part of the Sleeping Bear Dunes National Seashore and is the southern most island in a chain that extends all the way to the Straits of Mackinac. The western shore has high sandy bluffs while the eastern shore has a low-lying rocky beach. There’s a National Park Service ranger station on the eastern side but the island is uninhabited. Having an island to ourselves for exploration was an exciting adventure for the entire crew. The only safe overnight anchorage is in the large and deep crescent shaped bay on the eastern shore of the island. Anchoring here is only advisable if the wind is from the N/NW, which it was on the weekend we visited. We dropped the hook in about 30 feet of clear blue water and went to shore in the dinghy. The beach is almost entirely smooth, surf-pounded rocks. A trail led us inland about 1 mile to discover an abandoned farm, orchard and horse-drawn farm equipment from the 1800’s when the island had residents. We eventually made our way to the old one room schoolhouse and imagined island life in the 19th century as we peeked through the windows. On the hike back to the beach we witnessed an amazing example of camouflage. A small yellow butterfly appeared to be resting on an equally brilliant yellow flower. On closer inspection we found that the butterfly was actually ambushed by an amazing yellow spider that apparently hides out on yellow flowers waiting for its’ prey to make a landing. 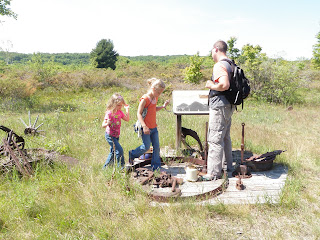 Later back on board our sailboat, we enjoyed the calmest evening I’ve ever witnessed on Lake Michigan and were mesmerized watching the boat floated over her slack anchor rode on the placid water. We took full advantage of being the boat in the anchorage that evening as the bay and forested backdrop echoed our shouts, songs and family laughter. Sleep was peaceful under the crescent moon in the crescent-shaped natural harbor on our own little deserted island. The next morning we found that our anchor had snagged. After a lot of effort and nearly an hour, we finally wrangled the hook back onboard and brought a large (6’x6’) section of rusted metal up from the deep blue. I re-checked the charts and realized that we may have anchored right over one of the numerous wrecks scattered about the Manitou Islands. If you plan to anchor at South Manitou, pick your anchorage very carefully! Although South Manitou Island is only a few miles offshore, the quiet solitude of the island felt oceans apart and proved to be the perfect retreat for a couple of days.