The North Channel is a unique cruising destination and therefore there are some things that just don’t fit into any of the previous "Best of" categories but still merit mention in an article titled “A Cruiser’s Best of the North Channel”.  So to conclude this series of blog posts, I'm presenting you with my "Best North Channel Cruising Tips".

Tip 1: North Channel Cruiser's Net
Every cruising season between July 1 and August 31, Roy Eaton broadcasts a very useful and entertaining VHF radio (channel 74) network specifically for North Channel cruisers. The net begins at 9 a.m. and lasts approximately 30 to 45 minutes. Roy starts each broadcast with calls for any emergency or priority traffic. Then he moves to world, national and local news stories, all communicated professionally and with a good dose of humor. Then the broadcast continues with check-ins from any cruisers picking up the signal anywhere in the North Channel. At this time Roy and any boat calling in share relevant information, ask cruising related questions and generally keep a sense of community among those cruising the North Channel. The whole show comes across as a call-in AM radio show and is as far as I know, unique in the Great Lakes cruising world.  Similar cruising nets are found for those venturing to the South Pacific and the Caribbean.  Without this valuable resource, we would never have known that current water levels and conditions would allow us to access the normally very shallow port of Spanish in Ontario.  Be sure to tune in if you’re in the area to be a part of the net!

Tip 2: Cruise early in the season
We arrived in the North Channel in mid-June and didn’t share a single anchorage with another boat until early July, including popular spots such as South Benjamin Island. If the weather permits, cruising the North Channel in June (or earlier!) can be a great wilderness experience. Not only will you have your choice of anchorages, you’ll also likely enjoy higher water levels, as they tend to go down throughout the season. As soon as Canada Day arrives on July 1, the North Channel starts to awaken and cruisers begin populating the many island, bay and cove anchorages right through August. Cruise early and have your choice of anchorages at the popular spots and then spend the busier periods in lesser-known gunkholes.

Tip 3: Visit Baie Fine, but don’t anchor in the Pool
While the beautiful freshwater fjord (largest in the world!) of Baie Fine is deservedly very popular, the Pool at the far end is massively overrated. The water is murky and brown with what little depth there is taken up by overgrown aquatic vegetation. This makes anchoring very difficult and also makes props and rudders badly entangled with weeds very likely. This isn’t to say you shouldn’t visit the Pool, but rather don’t plan on anchoring there. There are some nice anchorages at the far end of Baie Fine in the narrows before reaching the Pool that are scenic and well protected. Once secured in one of those more preferable spots, take your dinghy to the Pool for exploring and don’t miss the short hike up to Topaz Lake at the Pool’s entrance. Locals and long time North Channel cruisers say that the Pool wasn’t always so shallow and overgrown with weeds, but that’s the reality today.

Ending a best-of list for the North Channel is like ending a maintenance list for your sailboat: There’s always more that can be added and you’re never really done. This series of blog posts is really just a starting point for planning a North Channel cruise. Hopefully you’ve gleaned a few tips and added a few items to your itinerary, or maybe you’ve just had something on your itinerary affirmed. In any case, if you’re fortunate enough to cruise the North Channel, savor every moment, as you really can’t go wrong if you’ve made it this far! 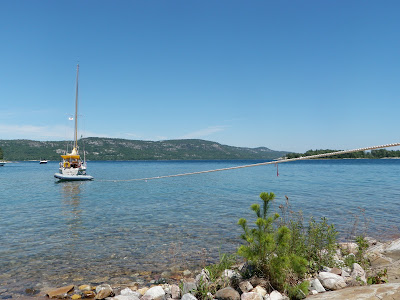