The next several blog posts (this is Part 1 of 5) will include my compilation of the very best that Lake Huron's North Channel has to offer to cruisers. Each post will feature a "Best of" category, starting today with the North Channel's Best Anchorages. Subsequent categories will include "Best Eats", "Best Marinas", "Best Towns" and "Best North Channel Cruising Tips".

There’s a lot for a cruiser to love in Lake Huron’s North Channel. Indeed, The North Channel itself could be included in a list titled “World’s Best Cruising Grounds.” However difficult it may be to single out specific locations and features of the North Channel as the best, I’ve tried to do so to the best of my ability in the following posts. Even after cruising the North Channel for almost an entire summer, I only began to scratch the surface of the many great locations that one could spend several full seasons exploring. Therefore, it’s very possible that I’ve left out some of your favorite spots. And like all good “best of” lists, there’s plenty of room for debate about what’s been included and what’s been omitted.

Best North Channel Anchorages
This is the bread and butter of the North Channel and picking favorites is not easy as nearly every anchorage is more impressively scenic and ideal. After an extended cruise and pouring over the charts, I’m convinced that a cruiser could spend a lifetime exploring the endless number of anchorages available in the North Channel. 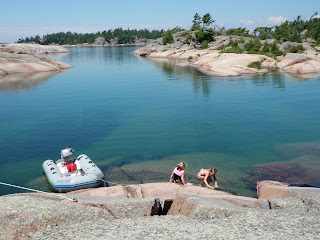 Most Scenic: South Benjamin Island (south side in the narrows)
The Benjamin Island group, including Croker Island, is quintessential North Channel and lure enough by itself to draw hundreds of cruising boats each year. You can hardly go wrong choosing where to drop the hook in the many bays surrounding the islands. But my personal favorite for scenary is in the narrow passage along the south shore of South Benjamin Island. The passage zigzags through rocky boulders for about 100 yards or so and offers room for just a select few boats to anchor. However, if you’re one of the lucky few to find an open spot, you’ve hit the jackpot. The views of the North Channel and South Benjamin Island are out of this world. Giant pink granite boulders the size of houses make you feel like you’re on another planet. The water in the passage is perfect for swimming with plenty of ledges to leap from and clear blue water to paddle in. There’s not a lot of room for excessive anchor scope or swinging, however, there are several iron rings cemented into the granite to use as mooring points to spider web your boat securely in place. The 3 or 4 little coves act as granite slips in nature’s best marina. The only downside to this anchorage is its popularity. In June you may be fortunate enough to have some time alone in this spot, but anyone cruising in July and August can expect company. Despite the sometimes crowded spectacle of the Benjamins in mid-summer, a visit to the south side of South Benjamin is worth it. 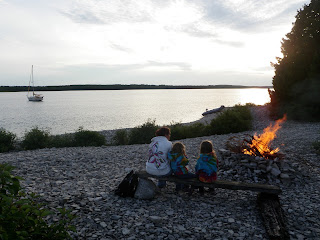 While cruisers entering the North Channel from the East may overlook Drummond Island as a destination, those coming from Lake Michigan or Lake Superior have Drummond Island as a gateway. After leaving civilization behind in Detour Village, many cruisers view Harbor Island in Potagannissing Bay as the only viable anchorage on the way to Cockburn Island, Manitoulin Island and points east. However, the eastern side of Drummond Island near Marble Head hides a little gem of an anchorage called Pilot Cove. The shoreline of Sitgreaves Bay near Pilot Cove curls finely like the tip of an elf’s shoe to form a perfectly protected natural harbor. The entrance to the cove is very narrow at only about twenty feet, but this isn’t necessarily a problem. What can be a problem is the shallow depth through this narrow entrance. The depth can teeter on only about five feet or less in a low water years. The bottom is gravelly rock; so enter with extreme caution if you don’t have a shoal draft boat. Use a dinghy along with a handheld depthsounder to check water depths before proceeding into the cove. If you find yourself at Pilot Cove and don’t think you can make it through the shallow entrance, you can still anchor out in sandy Sitgreaves Bay if the wind and wave forecast permits. Inside Pilot Cove is an ideal spot for passing a few days’ time. The cove deepens and widens inside the entrance enough so that 2 or 3 boats can anchor snuggly. But be aware of the many timbers littering the bottom that can easily foul your anchor. Privacy and seclusion are the order du jour. There are plenty of trails ashore for exploring and lots of perfectly sized boulders to use as a fire ring. White-tailed deer often wander down to the waters edge to share the anchorage at dusk. 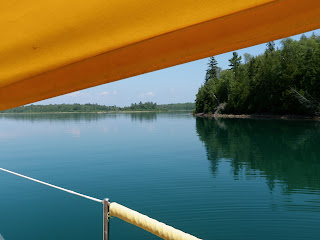 Best Overall: Browning Cove, Heywood Island
If you’re east of Little Current and have North Channel big hitters like Baie Fine and Covered Portage Cove on your itinerary, don’t overlook a favorite anchorage among locals in Browning Cove on Heywood Island in the open waters north of Manitowaning Bay. I suspect many first time North Channel cruisers hurry past low-lying Heywood Island while exploring the area between Little Current and Killarney. If shoreside hiking and exploration is your fancy, than Heywood might not satisfy because its thick forests that make going ashore very difficult. However, if turquoise water, a sand beach and plentiful wildlife sound inviting, read on. Heywood Island has one large and well-protected bay on its northwestern edge with a small (~100 feet wide) channel stretching east behind tiny Browning Island into Browning Cove. The larger harbor can get busy in July, but there’s plenty of room for lots of boats to swing at anchor. If you enter the large harbor and don’t like the view or feel crowded, veer east down the tiny channel. The water quickly drops to 20 feet at the shore’s edge so you can (and should!) take a stern line to shore and tie off to a tree, North Channel-style. This keeps the boat from swinging and leaves the stern within feet of the forested shore. You’ll feel like you’re at a floating wilderness campsite! The low wooded island is known as a haven for many species of birds, including nesting bald eagles and loons. The beautiful turquoise water is very inviting and swimming is excellent. Browning Island provides great protection from any weather brewing out in the open water. Don’t forget to take a dinghy ride over to the large sandy beach and wide sandy shoal in the big harbor. Sand beaches are a rare find in the North Channel and the one on Heywood Island is one of the best. This is one of the spots that is the whole package: opportunities to socialize in the big harbor, seclusion in the little channel, sand beach, beautiful water, good protection and abundant wildlife.