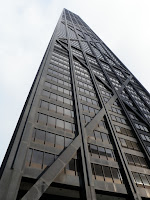 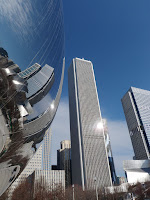 The middle of a sailor’s winter here in the Great Lakes is marked by the occurrence of the Strictly Sail show in Chicago at the end of January. Chicago is the perfect host for such a show, with frozen Lake Michigan as a backdrop, skyscrapers creating one the world’s best skylines and deep dish pizza to feed your hunger. The show itself gives you something to look forward to after the holidays are over and helps you ease into your spring maintenance, repairs and upgrades for the coming sailing season. As the nation’s largest indoor all-sailboat show, there’s literally something there for every kind of sailor.

Best In Show: Tartan 4300
While many of my favorite bluewater sailboat builders such as Pacific Seacraft, Valiant and Tayana were not at the show, the Tartan 4300 appealed very well to my salty sensibilities. I have nothing against the higher volume production boat builders like Catalina, Beneteau, Jeanneau and Hunter but you immediately notice a different feel when you step aboard a Tartan. First, the exterior styling is much more traditional with longer overhangs, teak toe and hand rails, a bit of spring in the sheerline and a boxier coachroof. The show boat was also fitted with the optional hard bimini which not only adds shade and protection but also puts the mainsheet traveler on top and completely out of the way. Once you step belowdecks, the look of solid cherry hardwood (as opposed to laminates) gives a cozy feel and showcases good craftsmanship. The cabin layout is also traditional, but nicely done and roomy. My favorite part was the huge nav station abaft the galley. With a cushy ultra-leather chair and plenty of desk and storage space it felt more like an office than a nav station on 43-foot cruiser.  FYI - Sabre's 386 was a close second for "Best In Show" and is in a lot of ways similar to the T4300.
Best Feature Seen on a Sailboat: Spa Tub on the Hunter 50CC

Sure, many people are going to say that the Hunter 50 Center Cockpit caters to those who want a floating condo, but there’s nothing wrong with being pampered while you’re staying at the dock. The aft master cabin in the 50CC features a spa-style tub under the berth. The mattress cleverly folds back toward the stern to reveal an athwartship tub with water jets. My only concerns would be the extra maintenance/plumbing required for such a tub and getting water on the cabin sole when you exit the tub. Still, this is a unique feature that I haven’t seen on any other production sailboat of this size.
Best Seminar: Around the World with Bob Bitchin.
Bob is known as a biker from Los Angeles who sold the first magazine he started (“Biker”), bought a boat and cruised around the world for several years. Upon his return he started Latitudes and Attitudes Magazine and recently also purchased another (“Living Aboard”). Bob, along with wife Jody, is a great storyteller and has lots of interesting material from his mishaps and triumphs while cruising. As Bob says, “Attitude is the difference between an adventure and an ordeal”, to which Jody adds “Sometimes it’s just an ordeal!” Another of my favorite Bitchin-isms is “Don’t dream your life, live your dream!”
Other notables from the show… 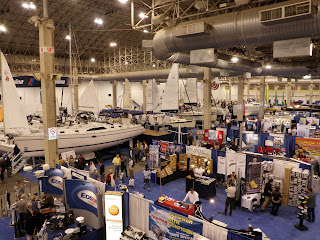 *The head of the v-berth on both the Catalina 355 and 445 electrically lift with the push of a button for easy reading and relaxing.  It's kind of like having a giant chaise lounge on the boat.
*The unique cabin layout of the Island Packet Estero puts the u-shaped dinette in the bow in place of the v-berth and also features twin aft cabins. The head and galley are amidships. While the design is a refreshing change, Erin and I would both prefer the more traditional cabin of the similarly sized IP35 for family cruising. (If you like the Estero's non-traditional cabin, you can find a similar layout on many Gozzards.)

*The Beneteau First 30 truly does remind me of a mini-Open 70 from Volvo Ocean Race fame.  The twin rudders, tiller steering, hard chine, t-shaped keel and plumb bow give a speedy appearence while the light colored veneers in the cabin and the cruising layout make me think this would be a good dual purpose boat.  While this isn't my personal preference in boats, the First 30 will help redefine the racer-cruiser label.
*The Michigan State University sailing club and U. of Michigan sailing club booths are located next to each other and it’s always fun to visit both and hear and see a little friendly rival ribbing. 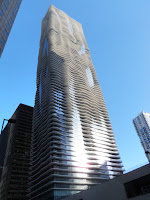 So the show was a nice winter diversion, a good excuse to spend some time in the big city and a chance to see the shiny new boats and gear.  But just like last year, we left the show with a greater appreciation for our own boat.  She may not have a jacuzzi tub, washer/dryer, or ultra-leather settees but she's ours and she does everything we need her to do!  We'll likely be taking a cruise to Chicago on Island Bound for a week or two next summer, so we were also able to scope out Monroe Harbor and talk with the Chicago harbor master about mooring ball rentals.  Admittedly, it will be nice visiting next time when the water out on the big lake isn't so hard.