We awoke at 5am to light air and fog as we departed Turnbull Island just before sunrise. I always feel blessed to see the sun come up over the water and light the way ahead of the bow. Seeing it many times on the trip is something I’m thankful for. Our intended route back to the United States would take us from Turnbull then south of Missasagi Island and across the North Channel proper to False Detour Channel between Cockburn Island in Canada and Drummond Island in the United States. In so doing, we were able to circumnavigate Drummond Island since we took Detour Passage coming into the North Channel several weeks ago. Next we were headed to Whitney Bay and Fort Drummond on the south western side of Drummond Island to clear customs. The trip was to be something like 55 nautical miles and take around 10 hours.

Our somewhat dated guide books said there was a U.S Customs Office at Fort Drummond Marine in Whitney Bay…but when we reached the bay and contacted the marina we were informed that we’d have to go around the other side of the island to Drummond Island Yacht Haven for customs. This added almost 2 hours to what was already a long day on the water. So don’t think there aren’t hardships that go along with cruising and that we’ve been up here in the beautiful north just splish splashing the days away. To steal a phrase from another cruiser I admire (Alex from Project BlueSphere), cruising isn’t always “peace, love and coconuts” or “palms trees and martinis” as Jimmy Buffett sings. But the unforgettably good experiences, wonderful sights, friendly people and growth that comes from living on a small boat as a family in a far away place far outweigh any obstacles. So we had to be on the water for 12 hours, but the water was deep blue, the sky clear, the sun hot and the wind pleasant…just another day in paradise! 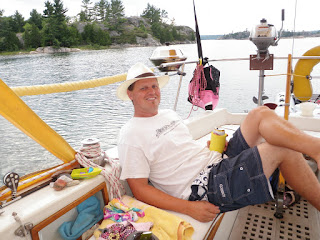