After listening to the Cruiser’s Net on VHF 71 and calling in our location, we made plans for our departure from Sturgeon Cove. Getting out of Sturgeon Cove’s rock-maze entrance was just as fun as getting in. So long as you’ve studied the charts, post a bow watch and know how to line up the range markers on shore, the entrance isn’t as bad as the guide books make it seem. Next it was a quick hop over to the small cove on Louisa Island’s eastern shore. Yes, yet another beautiful rocky anchorage. But this time we were joined by about 6 other cruising boats. We use the “North Channel Tie Up” with a bow anchor and a stern line tied to a tree on shore to keep us from swinging into the other boats in the cozy little cove. At the center of the cove was another sandy beach which we all swam to from Island Bound. The water felt great in the 80 degree heat of midday. 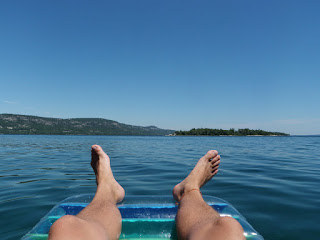 Later that day a 32 foot center cockpit ketch (s/v Western Whim) anchored next to us. However, the girls quickly pointed out that “There’s kids onboard!” even when the ketch was nearly ¼ mile outside of the cove. After they were settled in we invited them ashore for a campfire and ’smores later that evening. After each boat had dinner, we took our dinghy over and picked up the crew of Western Whim since they didn’t have a dinghy for getting to shore. We all shared ’smores, laughs, wine (adults only!), and some socialization, something Island Bound’s crew was looking forward to. The crew of Western Whim consisted of a mother, a father and two boys aged 7 and 8, all from Sudbury, Ontario. We had a great evening and truly enjoyed their company at the campfire! 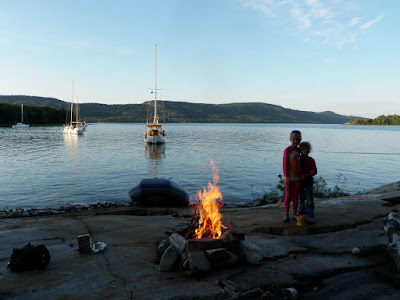