The nice new marina aside, there wasn’t much to keep us in Spanish for very long. But the truth is that even if Spanish had all the amenities of our home marina (pool, showers, playground, etc.), you’d be hard pressed to keep us there longer than necessary to reprovision. You see, we’ve grown quite fond of life on the hook in the islands of the North Channel. There’s something freeing about being unplugged from electricity, cellphones, internet and the sounds of civilization. At anchor you learn what you really need and you learn how to get it. You learn what you don’t need and you live without it. Life at anchor is just that simple. 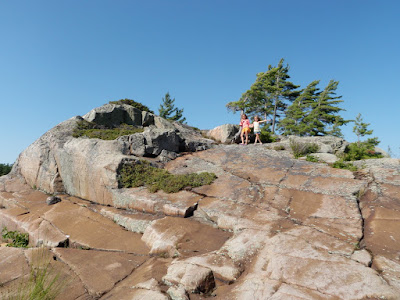 So we left Spanish behind and headed out into the Whalesback Channel eager to “live free and sail far” during the relatively small amount of time that remained for us in the North Channel. The bow was pointed west towards Beardrop Harbor as we moseyed along under full sail in 8 knots of a southwestern breeze. The girls rode in the dinghy for about a half hour as it was towed behind Island Bound. They both shouted with excitement asking what it was that was trailing from our stern. As I looked over the stern rail I first thought we had caught a rope on our rudder as I looked at the white/silver line flapping about one foot beyond the stern. Then I realized that what we were actually looking at was a lamprey. For those that don’t know, the lamprey is an invasive parasitic fish species that entered the Great Lakes from the Atlantic Ocean when the St. Lawrence Seaway was opened up. It has since thrived on the many salmon, lake trout, pike, muskie and other large fish in the Great Lakes. The lamprey attached to our transom must have thought he struck gold by hooking up with a 28 foot fish, but to his dismay Island Bound’s fiberglass skin proved to tough for his sharp teeth to penetrate.

We squeezed through the pinch point near Berrypicker Rock and were amazed as the many rocky shoals and islets of the Whalesback Channel lay before us. This channel must truly have been a daunting sight for early mariners who weren’t blessed with our charts, gps and chart plotter. As the rock carrying the “Whalesback” name for which the channel was also named came closer, we all imagined those early mariners seeing the rock through the fog and thinking it might be a whale’s back. Turtle Rock must similarly have reminded them of a giant sea turtle’s shell breaking the water’s surface. 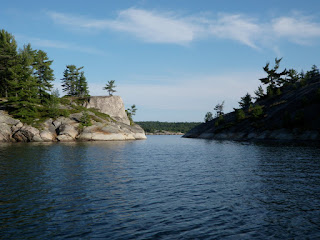 Island Bound pulled into the protected anchorage at Beardrop Harbor and we joined 16 other boats already at anchor for the night. First Nation (or Indian to us Americans) legend tells us that the large black bear population in this area was driven to the steep cliffs that surround the harbor and forced over the side by First Nation warriors, thus the “Bear Drop” name. In addition to being a good location for spotting bears, we had heard the anchorage was excellent for fishing. We concur, as Isabel promptly caught a nice sized walleye on her bobber. Later in the evening as the sun was setting I caught another and we suddenly had a surplus of fresh meat in our icebox.

We typically wake early while at anchor because the rising sun over the water is such and amazing sight through the open ports on Island Bound, but we all slept in until 8am in Beardrop Harbor. The day ahead promised more great sights in the Whalesback and another popular anchorage in Long Point Cove. 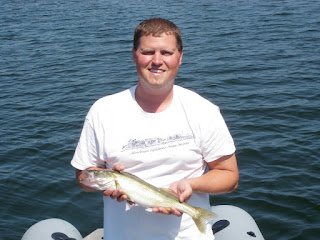