I won't lie, it was hard to leave the beauty of South Benhamin Island.  Not only was it hard to mentally leave, but it was also physically hard to get the boat out of such a tight anchorage with the wind building from the west.  We managed to do so and began making our way through the navigational hazards on the way to the small village of Spanish, Ontario.  First we had to negotiate the rocks west of Eagle Island, then it was through the small pass into the McBean Channel.  From the McBean, we had to announce a security (say "Say-cure-i-tay") on VHF channel 16 as we entered passed through Little Detroit, the tiny rock cut connecting the McBean Channel to the Whalesback Channel.  Once in the Whalesback, we had to weave our way around Whiteaves Island on approach to the shallow channel leading to Spanish.  The Spanish channel is supposedly dredged to 7 feet but we heard of multiple boats with 5 foot drafts hitting bottom on the cruiser's net, so we were anxious.  We kept the speed up because we knew the bottom was soft mud in this area and speed would hopefully carry us through if we did touch ground.  We made it to the Spanish Municipal Marina without incident and promptly hiked the mile to the nearest grocery store.  Luckily, the store clerk was willing to drive us back to the marina for the agreeable sum of $5 USD.  We'll spend the windy night here in Spanish and prepare to begin the trek westward and then south that will lead us back to Grand Haven in August.  But before we think too much about our home port, we've got all the splendor of the Whalesback ahead of us.

As a bonus, I've included a picture from Bridal Veil Falls in Kagawong.  Enjoy! 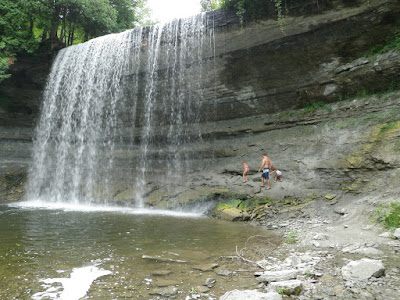 A happy navigator just made it through Little Detroit! 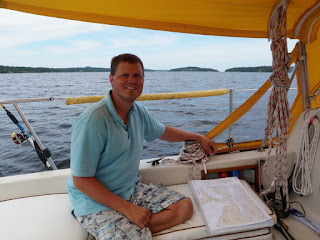 Can you spot s/v Island Bound in the picture below (Spanish Marina)? 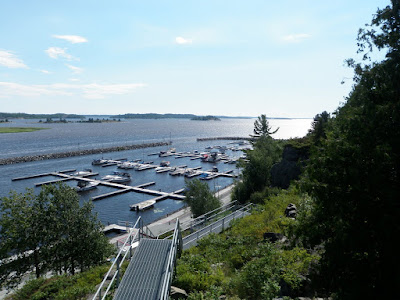