The wind was still howling. The waves were still frothing with whitecaps. The crew of Island Bound was still full of a sailor’s gusto and wouldn’t be denied another of the North Channel’s treasures. So we pulled anchor in Snug Harbor and motored out the rest of Lansdowne Channel and then motorsailed with a sliver of the genoa unfurled with 25 knot winds on our port quarter, pushing us towards the much anticipated Baie Fine and the Pool. We couldn’t spot the all important green-red-green buoy marking the safe shortcut into Baie Fine with the cresting waves and spray from the wind so we prudently took the long approach around Duncan City Reef, keeping Caroline Rocks safely to starboard.

Baie Fine (pronounced “Bay Fin”) is a very unique experience. The only other place in the world where you can visit such a fjord is in Scandinavia. Here in Baie Fine you can take your able craft right up the middle of the fjord with sheer granite walls just 10 feet from your gunnels. The navigable waters of the fjord stretch for at least 8 nautical miles to an open area at the end named “The Pool”.

Only moments after entering Baie Fine we were greeted by a bald eagle soaring down from the granite peak above and glide over our masthead on its’ way to a perch in one of the pines that seem to grow directly out of the vertical rock walls. As we motored away our binoculars held to our eyes watching the big raptor in the tree. I told Erin that cruising in Baie Fine felt like sailing through Yosemite Valley if it were flooded with water. The mountains, rocks, walls and trees had a the wilderness feel that would have kept Ansel Adams’ shutter clicking for days. 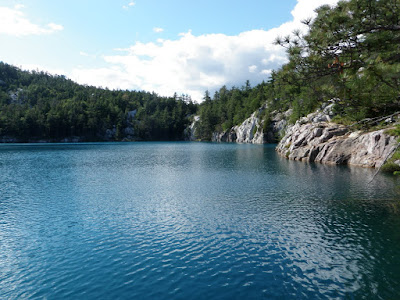 Baie Fine narrows considerably as you approach The Pool. We rounded the little rock island with the Evinrude family cottage perched on it and eased our way slowly in. The guide books mention 7 foot depths and a very weedy bottom in The Pool, but they might more appropriately say that The Pool is down right overrun with weeds, so much so that we felt like Island Bound grounded out as we slowed to 2 knots under almost full throttle. In reality, we weren’t hard aground, but rather had so many weeds clinging to our keel and entwined on our prop that our little Volvo was being choked. I quickly determined that The Pool would be better explored with the dinghy. We turned 180 degrees and went to find an anchorage midway in Baie Fine. When the anchor was set (stern-tie to shore, bow anchor) behind the protection of a little rocky hook we hopped in Island Hopper and chugged with all 2hp of the little-Honda-that-could back to The Pool. 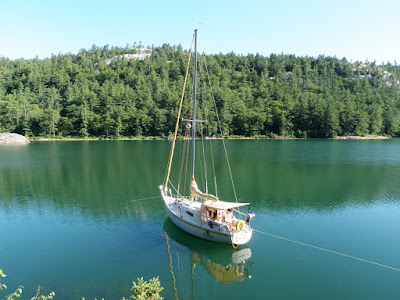 There’s a small landing on the north side of The Pool where you can bring your dinghy ashore and explore the many trails in one of Ontario’s best Provincial Parks. The wilderness that awaits on shore is superb. We followed a rocky wash through the thick, dark forest for about ¼ mile until we saw the trail sign for our destination, Topaz Lake. After following the Park Service’s yellow blazes for about a mile up the mountain, the trail opens to the grand shores of Topaz Lake. If anything near Baie Fine should be called “The Pool”, Topaz Lake surely deserves the honor instead of the prop choking jungle labeled as “The Pool” on the charts and guides. Obviously, Topaz Lake is a brilliant blue color…topaz blue to be specific. My daughters and I quickly shed our clothes and jumped in with our underwear (we forgot to put bathing suits in the backpack!). Erin stayed on the rocks above taking pictures and munching on wild blueberries. 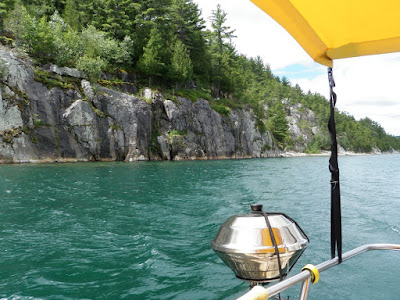 Later that evening back at our cozy anchorage, we had a spaghetti dinner and caught a nice small mouth bass just afterwards, assuring that he wouldn’t become tonight’s dinner. It seems the fish in the North Channel only bite after they know dinner has already been served for the fishermen. After dinner went to shore and had a campfire and roasted marshmallows on the rocking outcropping about 20 feet above Island Bound.