Erin and I got a mid-morning start on the route from Mackinac City to Harbor Springs after enjoying a quiet breakfast together at a restaurant in Mac City. After leaving the marina we quickly passed under the mighty Mackinac Bridge and were in awe of the view from beneath. The weather began to deteriorate as we moved westward towards the abandoned lighthouse east of Gray’s Reef and offshore from the mainland. Waves were building to from 2 to 5 feet and the sky darkened with rain clouds. It wasn’t long before we were motoring into the wind and waves in an intense downpour. Surprisingly, this is one of the few times we’ve need our foul weather gear on this trip. The rain stopped after about an hour and the skies cleared but the seas remained lumpy as made our way past another mid-lake lighthouse (Ile Aux Galets Light) and into the relative protection of Little Traverse Bay. Harbor Springs was busy with summer cruisers so we were happy to anchor at the far west end of the bay. We were soon ashore enjoying the hustle bustle of the busy main street in Harbor Springs. We treated ourselves to a waterfront meal at Dudley’s Deck and watch the crews scurrying aboard the large yachts in the marina.

We were anxious to get to Lake Charlevoix and see the girls again even though it had only been 24 hours since we’d seen them. Not only are Hannah and Isabel great daughters, but they’re also great crew and missed when they’re not aboard! However, the weather the next day had 5 and 6 foot waves and a headwind out on Lake Michigan so we conservatively decided to stay in port until things settled down the following day. It was just as well since we spent the day cleaning the boat, relaxing at anchor, swimming and enjoying good conversation and sundowners with the crew of a neighboring sailboat. 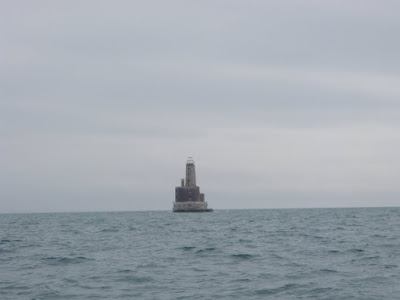