Our plan for today was to make the short hop up the Wabauno Channel to a little used anchorage behind Mosquito Island. However, winds were from the southwest and this would leave the anchorage exposed to waves building out in the channel. Another option was Sturgeon Cove on the northern shore of Great Cloche Island, but the entrance to the cove is riddled with rocks and shoals and most guide books recommend caution when going there. We have been meeting quite a few fellow cruisers along the way and crews from two boats suggested we give Sturgeon Cove a try after hearing their guidance and experiences with the entrance. The crew of s/v Kismet even invited us aboard there Catalina 40 to review the Great Lakes Cruising Club’s Pilot Guide and hand made chart for the cove. While aboard s/v Kismet, I reviewed the entrance procedures while Isabel and Hannah played with Kismet’s canine crew of two Dalmatians. The crew of s/v C’est La Vie was also planning to go to Sturgeon Cove today aboard their Beneteau 43 and offered to come out in their dinghy to guide us in if we needed help. It turns out we didn’t the assistance of a guided entry via their dinghy, but their kindness exemplifies the spirit of the cruising community.

After a rousing sail, reaching speeds around 6.8 knots with just the genny out, we took our time examining the entrance to Sturgeon Cove. I was on the bow with my wide brimmed hat, polarized sunglasses and an aerial photo of the entrance in hand as Erin skillfully handled duties at the helm. We identified and used 2 of the three range markers built by the Great Lakes Cruising Club and made an “S” shaped entry into the cove, not even putting a single scratch in our VC-17 bottom paint.

The cove is picturesque with rocky shores to the west and a sandy beach to the east. I know, I sound like a broken record, but hey, the North Channel is splendidly blessed with good scenery, commonly ranking it among the top 3-5 cruising destinations in the world. The girls played for a couple hours in the water at the beach as Erin and I continued chipping away at our library of summer reading.

The next morning Hannah and I woke up early with the sunrise and trolled some spoons around the perimeter of Sturgeon Cove. As we approached the rocky entrance, Hannah hooked up with a nice smallmouth bass. After she got it in the dinghy we circled around for another pass at the rocks. This time both poles got hits in the exact same spot. All total, Hannah landed four smallmouth and added to our supply of meat in the icebox. 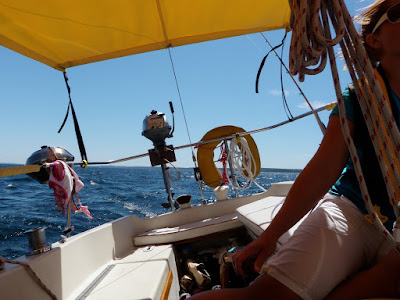