We woke to a misting morning rain but still proceeded with our plans to go stay in one of the North Channel’s most popular and most stunning anchorages. Covered Portage Cove was just a short motor away, back through the rocky shoals of the Double Island Ledges. When you read about or talk with veteran cruisers about the North Channel, Covered Portage Cove always comes up.

The entrance to the cove passes high rocky bluffs on the south side and a few scenic little coves on the north. The high bluffs create a really neat profile of an Indian chief’s face as round your way into Covered Portage Cove. Next the cove opens up with spectacular rock formations on both sides and teal-blue water and wind blown pines and cedars along the shore. After we were sure the hook was set we took the dinghy to shore in the far back end of the cove and began a steep hike up and around the back side of the rocky bluffs. The forest away from the cove was thick with old growth pine and large boulders. As we hiked higher we began to see the sun glistening off the rocks. When the forest gave way to large open expanses of rolling granite we found wild blueberry bushes growing low in all the rocky cracks and crevices. We stopped for about and hour to pick and eat blueberries. The girls verbally made lists of all the yummy recipes we could add blueberries to as they feasted on the sweet, sun ripened little treats. We filled an empty 12oz. water bottle with berries to keep for pancakes the next morning. 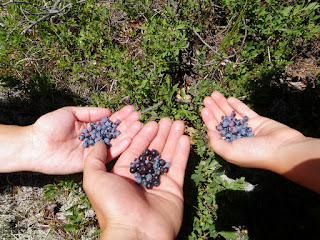 After our tummies were full of a bear’s favorite food, we carefully wandered over to the rocky cliffs and peered down at all of Covered Portage Cove and tiny Island Bound sway breezily at anchor hundreds of feet below. We sat on the ledge and took in the wide panorama spread out before us. The image that was etched in my mind as I sat on the ledge is one I’ll fondly recall many times this coming fall and winter while the boat is back on her storage cradle.

Back on the boat at anchor we casually tossed out a night crawler and set the fishing pole in the rod holder as we grilled our pork dinner. Within just a few minutes the bobber disappeared and Hannah began reeling in a nice 4 pound rainbow trout. This was the first fish we have caught on the cruise, though we’ve drowned many worms and dragged many spoons. The girls and I took our fresh catch to shore to filet it. As we got back to the boat with the dinghy we watched gulls and vultures fight over the scraps we left behind.

Just before dusk, a couple from a neighboring boat rowed over in there dinghy to chat. As several other veteran cruisers have mentioned to us previously, this couple again voiced there opinion on just how meaningful and valuable cruising was for children. We obviously agree since our children are with us, but it’s always good to hear. This couple had been anchored in Covered Portage Cove all week and mentioned that earlier in the week a bear and her cub had come down to the water right near where we were anchored and the night before two moose had swam across the cove at sundown. As the couple was heading back to there boat, they mentioned that they always feel close to God in Covered Portage Cove. Given the beautiful surroundings, abundance of wildlife and quiet calm felt at anchor, Erin and I agree. 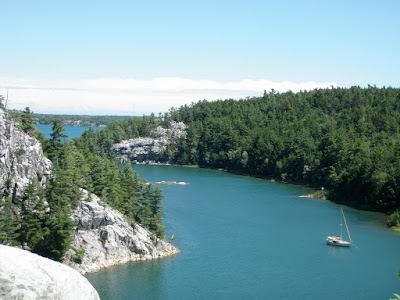