We topped off the fuel tank and pumped out the holding tank in the morning in Kagawong just prior to departing for multiple days at anchor in the Benjamin Island group. The wind was 8 to 10 knots out of the southwest and we had a delightful sail all the way to Croker Island under the headsail alone. The approach to Croker Island meant we had to correctly identify Secretary Island and the Sow and Pigs, keeping Secretary to starboard. After passing Secretary Island we chose to take the safer deep water entrance to Croker’s inner harbor by passing north of Porcupine Island. 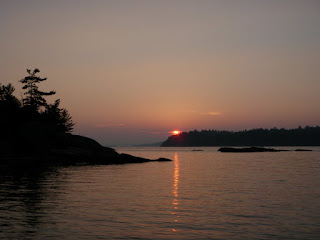 Croker’s main harbor had three other boats at anchor but we snuck into the smaller harbor behind the tiny unnamed island within the harbor for a quiet night by ourselves. After securing the anchor we all swam for at least an hour and enjoyed the rocky landscape of our surroundings. I snorkeled around the small harbor and tested my diving ability to see if my recent asthma diagnosis had changed my ability to stay submerged. For the most part, I was still able to enjoy snorkeling just as I have for many years ever since my parents introduced me to the sport in the Florida Keys when I was a boy. Croker’s underwater landscape was nearly as interesting as its’ rocky topsides. The harbor had many rocks, boulders and logs that I explored with a bright afternoon sun overhead. 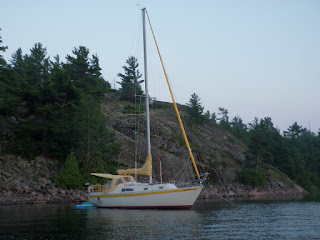 The next morning we took Island Hopper over to the main harbor and went ashore to explore. The blueberry picking was excellent on the way up to Croker’s tallest peak. The girls had a blast scrambling over the massively large boulders as we hopped from one blueberry patch to the next. From the top of the highest rock we could see many islands spread out before us. We were once again reminded of how fortunate we are to be exploring this cruising paradise right here in the Great Lakes.