The trip over from Croker to South Benjamin Island was short but full of navigational challenges. We had to retrace our previous course around Porcupine Island and then between the Sow and Pigs and Secretary Island. Then we turned west and watched carefully for shoals along the southern rim of the Sow and Pigs as we neared South Benjamin Island. We were somewhat familiar with South Benjamin as we had anchored one night here previously in stormy weather. This time we were seeking out one of the small little “hidey-holes” in the narrow rock passage on the southern end of the island that we had previously explored with our dinghy. 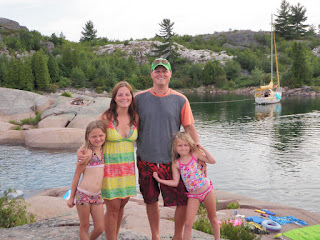 To our surprise we found our preferred spot empty and we carefully wove our way in at idle speed with a bow watch. Because of exploration with the dinghy we knew we had about 8 feet of water to play with in the tiny rock cove we intended to stay in. This particular spot is mostly known by locals and as such has several stainless steel rings drilled into the rocks for mooring. As we swung into our tiny rock slip, we put out our Lewmar Claw off the starboard stern and then moored to the steel rings with our stern port cleat and starboard bow cleat.

Later that day a couple of power boaters anchored across the channel from us. Each boat carried children the ages of Izzy and Hannah so South Benjamin became our very own swimming pool party for the afternoon. All three families mingled together while the children swam and played. Later we cooked dinner over a campfire and had roasted strawberry marshmallows as the sun set on a perfect North Channel day.