As beautiful as Covered Portage Cove is, we were still eager to keep moving forward because the North Channel offers so many unforgettable spots. We’re starting to think that even an entire summer is not enough time to explore all of the anchorages, gunk holes, beaches and ports. Winds had been gusting to near gale force overnight and were expected to stay near 30 knots through the day. While Covered Portage Cove offers very good wind protection with its’ high bluffs, we knew that the short 6 nautical mile trip down Lansdowne Channel to Snug Harbor should also be fairly protected. After feasting on pancakes bursting with the wild blueberries we had found the day before, Island Bound was underway again.

We arrived at the Snug Harbor anchorage after just a little over an hour of motoring into the wind and chop. With Erin on bow watch and myself at the helm we motored slowly across the shallow bar at the entrance to Snug Harbor. The natural harbor opens up and deepens to around 25-35 feet after passing the entrance. We anchored in the far northwest corner where we would be protected from the high winds by the abundance of pine trees on shore.

After the boat was secure, we piled into Island Hopper and headed to shore to seek out a trail through the woods past Devil’s Bay Lake and over to what the guide books said was a fossil filled beach on Frazer Bay. After a bit of searching along the shore we picked up the trail and had a great 1 mile hike through the thick forest. Along the way we found a treehouse (or maybe a moose/bear/deer blind?) that the girls enjoyed . When the trail finally spit us out on the other side we were standing on the shore of a large, open bay (Frazer Bay). The rock along the waterline was composed of large shale shelves while just above the splash zone were the thousands of baseball sized rocks filled with fossils. While hunting for fossils, Isabel and Hannah were startled by a snake soaking up some heat from the rocks along the shore. Luckily, this wasn’t the areas only poisonous snake, the Missasaugi rattlesnake, but rather something lessen threatening. The snake eventually slithered away under the rocks and roots as we stared.

Back onboard, we cooked the salmon we caught yesterday and settled in for a night of good books and games. The crew of Island Bound slept snugly in Snug Harbor as the winds howled through the trees. 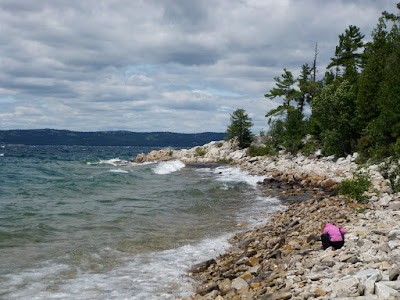