Browning Cove was just what we dreamed a proper North Channel anchorage would be like. After spending such a wonderful day there it was hard to leave the next morning, but there’s always more to explore in the North Channel. We left Heywood Island behind in the light air of the morning and proceeded up picturesque Landsdowne Channel past Hole-In-The-Wall. Lansdowne Channel is well protected by the La Cloche Mountains to the north and Partridge, Center and Badgeley Island to the south.

As we passed Maxwell Point on Badgeley Island it was time to weave our way through the tricky shoals of Badgeley Rocks and Double Island Ledges. The area is well known for Cash Flow Rock, the rock that many boats run hard aground upon and thereby help cash flow to the fiberglass repair shops in Killarney. With Erin posting a bow watch, I moved slowly ahead through the rocks to the channel leading into Killarney. The town of Killarney reminds me of the many coastal ports along the rocky coast of Maine. The homes in Killarney are built upon huge slabs of granite jutting up from the Earth. The channel between mainland Ontario, where Killarney is, and George Island is narrow and dotted with many small marinas. After passing through the channel and scoping out all the marinas, we chose to stay at the Sportsman’s Inn and Marina.

The marina featured new floating docks, a nice ships store complete with toys for the kids, a few basic groceries and the wick we needed for our Weems & Plath oil lamp (finally!). After docking, we quickly made our way down the main street over to Herbert Fisheries on the water for fresh fish and chips. Herbert’s is North Channel fixture and a unique experience. They harvest fresh whitefish from Lake Huron daily for the deep fried fish and chips (fries) that they serve. An old school bus is parked on the waterfront and has been converted into the kitchen. You walk up to the bus window to place your order and then eat at picnic tables along the waterfront. The menu is simple: 3, 4, 6, 12 or 20 pieces of fish and either small or large baskets of fries. That’s it. It’s wonderfully simple and delicious. 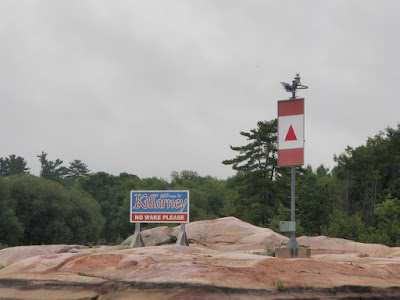 Today happened to be our anniversary, so after shopping for a few groceries at the Killarney General Store and checking out the only gift shop in town (located in the old jailhouse), we took showers in the very clean washrooms. Today happened to be Erin and I’s 12 wedding anniversary so we splurged and had pizza in the Sportsman’s pub in there lodge. And that’s about all there is to Killarney…nice scenery, several small marinas, a general store and Herbert Fisheries.