It was just a short distance from the beauty of Beardrop Harbor to the much anticipated Long Point Cove. We sailed lazily under full sail in light air and trolled with a NorthPort Nailer and our Dipsy Diver for salmon to no avail. Just the same, the cruise over to Long Point Cove was a relaxing way to spend the midday. In the distance to the west we could see Turnbull Island and the open waters of the western part of the North Channel. We were quietly reminded that our time in the North Channel was coming to a close. However, I’m sure to spend more time here in my mind this winter pouring through the memories we’ve made.

Long Point Cove proved to be a popular anchorage as we came in past Navy Island and saw 15 other boats already at anchor in the tiny cove. We took our time idling around the cove and weaving between the boats while carefully picking a perfect spot where we could swing at anchor without worry of bumping the other boats.

For dinner we had our walleye from the previous day grilled with Cajun seasoning, fresh squeezed lemon and olive oil along with grilled garlic bread. Later that evening we had Erin’s recipe for blueberry cobbler with the liter jug of blueberries we picked in Long Point Cove that afternoon. We’ve eaten very well on this cruise, as evidenced by the above menu. Much of our meals have consisted of things we’ve randomly thrown together with great success. There have been blueberries added to many meals. There was also a meal of whitefish that we decided to panfry after rolling it in egg and crushed Honey Comb cereal because we were out of Panko. It turns out that Honey Comb encrusted whitefish is a real treat. Remember, if you find it on the menu at the Bonefish Grill in the future we thought of it first!

Just before pulling the anchor in the morning I dropped the gate hook for our lifeline gate overboard so I was treated to an early morning snorkeling expedition prior to departing Long Point Cove. It took about 10 minutes of searching in the 10 foot deep water but I found the hook and we were soon headed for our next and last North Channel anchorage at Turnbull Island. 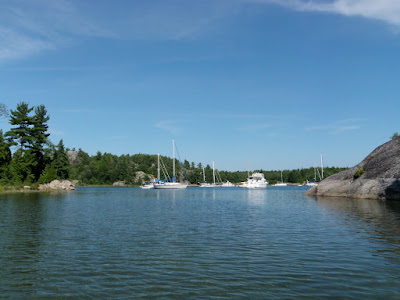