The first day of July brought summer weather with it after almost a week of cool, overcast days and intermittent showers. July 1st also had other significance in the North Channel as it is Canada Day, the equivalent of America’s Fourth of July. We were leaving Baie Fine, the eastern stops in the North Channel and several days at anchor behind as we had an amazing sail to Little Current. Erin and I even had time to enjoy the ride on the rail as the girls played in the cabin and Otto manned the helm without complaint.

We topped off our gasoline tank and pumped out the holding tank at Wally’s just prior to tying up at the town docks in Little Current. We were greeted with the sounds of live music and Canada Day celebration as we tidied up Island Bound. The main street in Little Current was closed to traffic and the townspeople set up art, craft and food booths along the sides. The live music continued until just after 8pm that evening. The Canadian people brought smiles to our faces with their national pride, friendliness and quirky accents (“ehh!?”).

Surprisingly the grocery store was open so we hiked the ½ mile up the hill and did our shopping. However, this time we got smart and took advantage of the free delivery service offered by G.G.’s Market and had them drive us and the groceries back to the dock. Who needs a car when you can hitch a ride! After shopping, we headed over to the Anchor Inn on the corner for dinner. The highlight was “poutine”, which is French fries smothered in gravy and cheese and served with vinegar and a couple local Canadian beers.

July 1st not only marks Canada’s celebration of independence but also locally marks the true beginning of the cruising season in the North Channel. True to form, we saw more boats on the water today than we had in the almost entire month of cruising prior. There’s also a local Little Current resident and veteran cruiser named Roy who broadcasts a North Channel cruiser’s net everyday from 9am to 10am on VHF channel 71. Roy starts the broadcasts asking for priority and emergency messages from all the cruisers throughout the North Channel that are tuned in. Then he follows with a weather report, some world news, local news and wraps up the show with a role call with all the tuned-in cruisers calling in with their vessel’s name and present location. If nothing else, it’s fun to hear where other boats are located and hear from friends you’ve met in port or at anchor somewhere else. 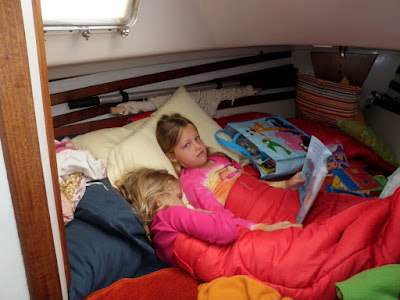