We woke at 4:15am to get an early start on the route to Charlevoix as storms were predicted for the next evening. As we clambered on deck in the dark of the early morning in South Manitou’s bay, we took in the quiet beauty of the calm lake one more time. I went forward and began the process of retrieving our 33lbs Lewmar Claw, 20 feet of chain and 200 feet of rode. The first 100 feet or so of the rode came in easily, but then things got difficult. I knew the anchor would be dug in after having been on the bottom in Lake Michigan for over 12 hours, but it felt more than just buried. The rode got vertical as I inched it back onto the boat. At around 60 feet left I couldn’t bring it in anymore. Erin joined me on deck and we heaved together, pulling in around 6 inches at a time and then cleating it off for a rest. After nearly an hour of wrestling with the anchor and wondering if I purchased one that was too heavy, we shined our flashlight down into the water and saw a gigantic piece of rusted metal coming up tangled in our rode. Yesterday we casually noticed a wreck listed on the chart near where we dropped anchor, but didn’t think much of it. Now it appeared that we were hauling in a piece of that very wreck with our anchor. The metal plate was approximately 6’ by 6’ in area and I was fearful that we might have to cut the rode and let the anchor and chain go. Then Erin smartly suggested we use the dinghy to help retrieve the anchor. I brought our dinghy (Island Hopper) around to the bow and was able to bring the anchor onboard the dinghy from underneath the large piece of metal. I unshackled the anchor from the chain and then let the chain, rode and metal plate fall back into the depths. This time when we pulled on the rode it was light. The metal plate must have fallen away after we removed the anchor. Finally, we were free from the anchorage! That was quite a way to start the morning, particularly in the dark of the early hours. 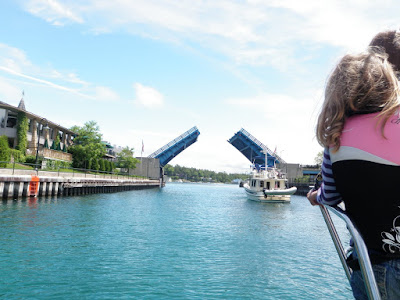 The rest of the day was much less eventful as we motored and sailed around Cathead Point and across the mouth of Grand Traverse Bay on our way to Charlevoix. Winds were again on our bow so sailing meant beating upwind. As we entered Round Lake we all decided a slip for the night at the marina would be a great way to clean up and recharge.
We actually ended up staying two nights at Charlevoix’s beautiful new municipal marina because the coil on our Volvo engine shorted out and we had to wait for the mechanic to replace the part. It turned out as a blessing because the weather on the second day in port was stormy, so we just enjoyed Charlevoix’s waterfront.