The day broke with an overcast sky but the winds from last night had subsided. We pulled the anchor around 8am and began motoring east towards Little Current, the largest town in the North Channel. The wind was light enough that the bugs were out for most of the 3 hour trip. We carefully rounded our way past the Sow and Pigs (rocks just south of the Benjamins), Croker Island and then south of Amedroz Island.

As we entered the channel leading to Little Current, we hailed Spider Bay Marina on VHF channel 68 and reserved our slip. Spider Bay was about a ¼ mile walk from town but the marina has free wi-fi and coin laundry facilities on site, so we decided to make it home for one night. After safely docking next to several chartered sailboats, we began cleaning Island Bound. Next it was off to town for a stroll through the gift shops and a stop at The Pantry Café for lunch. I was treated to the special of the day, a Texas brisket sandwich. Even in relatively remote Little Current on Manitoulin Island we were able to see the influence of the United States.

After lunch we continued up the hill out of town and to the grocery store to restock our food supplies. We also stopped at a hardware store in hopes of finding a replacement wick for our Weems & Plath oil lamp, but were unsuccessful. We again walked nearly ¾ of a mile back to the dock with groceries in hand, but didn’t miss the car so much this time as both our minds and bodies are getting use to the simplicity of cruising life.

Little Current is somewhat of a misnomer as water from the large stretch of the North Channel to the west is funneled through the narrow channel beneath a one lane swing bridge creating a rather big current. The buoys in the channel have an interesting shape. The base of each buoy is shaped like a little tugboat and therefore point into the current so boaters can quickly identify the direction the water is traveling. Obviously this is useful information when docking or transiting the channel through the swing bridge. The swing bridge opens on the hour, every hour, for 15 minutes at a time. It waits for no boat. If you’re a straggler trying to make it through at say 1:14.55pm, you might well have your mast guillotined right off the deck! 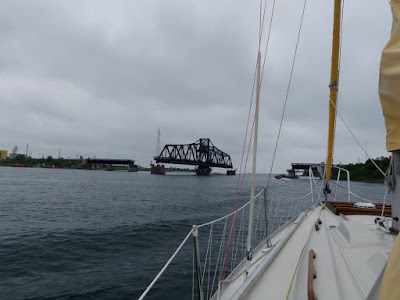