The rain started falling at midnight in Pilot Cove and didn't let up until 8am.  Winds had increased to 10-15 knots from the east with gusts to 20 knots.  We pulled the anchor, which held very securely through the night, and started making our way east into 3-5 foot seas with the wind on our nose.  The ride was rough and wet, with spray and drizzle finding their way into the cockpit beneath the dodger and bimini.  We wore our foulies for the entire 4 hour trip over to Meldrum Bay on Manitoulin Island.  The girls brought their sleeping bags down to the floor of the salon and fell asleep for most of the passage.

As we cruised north of Cockburn Island and approached Missisagi Strait through the dense fog, we spotted a freighter between us and the shoreline.  It was difficult to make out the ship's heading through the fog, but was easy to tell we were getting too close for comfort.  I got on the VHF and hailed the "freighter just north of Cockburn Island outside of Missisagi Strait".  After three attempts (one on 16, one on 9 then another on 16) the captain responded.  I asked for his heading and for confirmation that he saw us.  The captain responded with "We're not headed anywhere...we're at anchor.  And yes, we have you on radar."  With that reply we knew it was safe to continue our course towards Meldrum Bay.

After arriving safely in Meldrum Bay, we tied up and cleared Canadian customs via a phone in the marina office.  We all took showers and then set off to explore the village of Meldrum Bay.  The exploration didn't last long as the only non-residential building in the village is the Meldrum Bay Inn and Restaurant.  The Inn is really just a large two story home offering dinner in their dining room while you await the food in the living room.  We had a coconut shrimp appetizer, a couple of local brews, baked whitefish and a ceasar salad.

We all slept soundly tied to the town dock in sleepy Meldrum Bay.  The next morning meant an early rise to beat the approaching storms for our passage to Gore Bay, also on Manitoulin Island.  Interesting fact of the day: Manitoulin Island is the world's largest freshwater island. 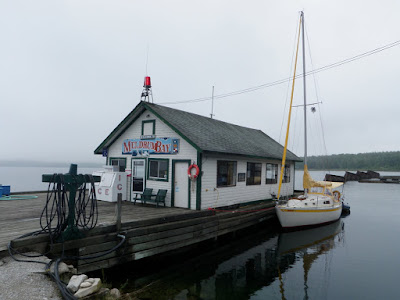