After having had the rare cruising combo of a meal at a restaurant and hot showers the night before, we were all feeling fresh and ready to continue eastward. We left tiny Meldrum Bay at about 6am and quickly hoisted the sails for what was to be an excellent close reach all the way to Gore Bay. Winds were generally 10-15 knots, but gusted to 20 when we weren’t in the lee of the many points on Manitoulin Island’s north shore. The boat hurried along at between 6 and 7 knots and 20 degrees of heel for most of the ride.


By this point , Island Bound’s crew now has their sea legs and we’re all quite comfortable with the rhythm of morning passages, afternoon explorations (either of an island or harbor) and evening fun (games, singing, fishing, etc.). We’re still surprised that there aren’t more cruisers out on the water. We only see about one or two boats a day, which is more than we saw while in Lake Michigan. The marinas remain less than full and the anchorages have been quiet.

The port town of Gore Bay is at the bottom of a long, deep and picturesque bay of the same name. The steep rocky wall of Gore Bay’s eastern shore is a striking contrast to the flatter and more developed western shore. We arrived at around noon and just beat a quick thunderstorm. As I cleated off the first docklline the thunder rolled and rain drops began to fall. The docks at Gore Bay Marina are some of the best we’ve seen. They’re wide floaters with nice stainless steal post-style cleats and new 30 and 50 amp power at each slip. Canadian Yacht Charters (CYC) shares the basin with Gore Bay Marina and offers an excellent ship’s store with just about anything you could need, including a great selection of local charts.

We took an afternoon walk into town in the rain. Erin and I wore our foulies while the girls each had on their pink ponchos and looked like walking bags of cotton candy as they playfully splashed their way up the sidewalks. We reprovisioned at the local grocery store and for the first time missed having a car when we had to lug the groceries 6 blocks back to the boat. 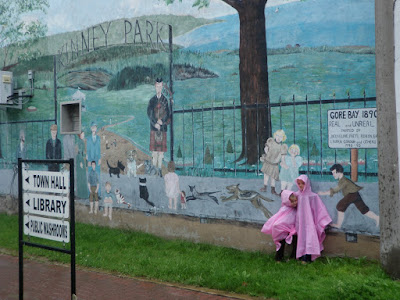 Back at the boat we enjoyed brats on the grill while chatting with our dock neighbors, who are 20 year North Channel veterans. They gave us some great tips on out of the way gunkholes and where to find nesting bald eagles. Many of the local Canadians on the dock were very friendly and stopped by to say hello and tell their story and here ours. The community is truly one of the great parts about cruising.

In the morning we treated ourselves to pancakes and bacon on our “liddle griddle” as we waited for the rain to finish. After breakfast, we took another stroll into town to pick up a few supplies at the hardware store and some fishing licenses at the local Ontario government building. Finally, we purchased a block of ice at CYC and shoved off for what would be a boisterous sail…