After securing the boat, we promptly headed to the busy main street on Mackinac Island to take in the colonial charm of the architecture, lack of cars, and plethora of horse drawn carriages. Both Hannah and Izzy were amazed that bikes and horses did all the work of cars and trucks on this unique island. After grabbing a Mexican combo plate at a mainstreet pub, we climbed the steep trail up to Fort Mackinac. The Fort dominates the landscape from the southern view of the island. Seeing the picketed barrier fences, the old cannons and reading about the history of British and American soldiers at the Fort we were all taken back a to another the 19th century. 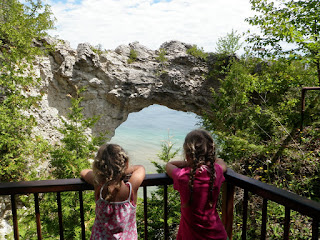 Next it was on to the governor’s residence on Mackinac Island. Every incumbent governor of Michigan is gifted the use of a colonial styled white mansion perched high on the sandstone bluffs of the island just down the road from Fort Mackinac. A fiercesome boy scout stood guard the day we walked by. We continued on down the road past a golf course and onto the Grand Hotel. As we approached the world’s longest front porch (yes, this is a fact) we were quickly greeted by a Grand Hotel employee who informed us that after 6pm formal attire was required on the hotel’s grounds. Apparently flip flops, Crocs and bathing suits don’t count. As we strolled downhill towards the town we saw a sign saying that the public was welcome to stroll the grounds of the Grand Hotel and its’ lobby for the small fee of $10 per person. For $40 we could fill our sailboat’s fuel tank and make it out the St. Lawrence to Maine! No thanks….we’ll pass on the Grand Hotel. 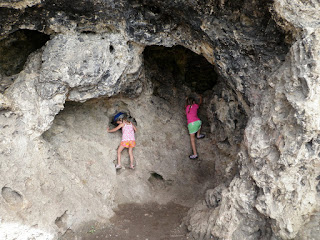 Our first night in the marina was a rocky one as the harbor is fairly exposed and the ferry traffic doesn’t adhere to no wake policies. Still, the marina facilities and docks were very nice after having been totally rebuilt in 2008. After breakfast, we headed to the bike rental shop and got one tandem bike for Erin and Hannah and a single with a tag-along for Isabel and myself. We then proceeded to play bicycle tourist for the eight miles it takes to peddle the circumference of the Island. We stopped at several rocky beaches, Arch Rock, The Tower, Devil’s Kitchen and a few other naturally occurring hotspots on Mackinac Island.

After a more restful second night, we stocked up on island-priced groceries at Dowd’s Market and cleaned our clothes at the Island Laundromat. We were ready for warm, windy (10-20 knots) day of sailing to the Les Chenneaux Islands.