Finally we had the perfect day for sailing. The winds were 10-20 knots out of the west which meant we’d be running downwind to the Les Chenneauxs. We started with 2 foot seas on our port quarter and the genoa poled out to port with the main held with a preventer to starboard. As the winds built we ended up on a broad reach with a single reef in the main. 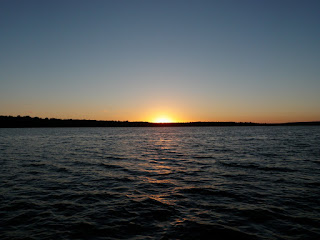 As we approached the channel in from Lake Huron to the Les Chenneaux Islands, the wind increased close to 20 knots and the waves built to 3-4 feet. The ride was fast and boisterous. As we eased the bow into the channel and the lee of Government Island, the boat stood upright and we cruised in to our cozy anchorage in Government Bay. There were two powerboats and two sailboats already swaying at anchor. We snuggled in between the two other sailboats and enjoyed another peaceful evening on the hook. We took our dingy in to shore and explored what seemed to be part of the national forest area with picnic tables and fire pits to camp by. The girls and I swam, all four of us watched oodles of tadpoles along the shoreline and we just generally relaxed in the quiet of the “Snows” after spending two days in the hustle-bustle of Mac Island. As a side note, I’ve been verbally referring to the Les Chenneaux Islands as the “Snows” because that’s what all the locals say. It drives Erin nuts…probably the teacher in her. The nickname “Snow Islands” comes not from the long cold winters but rather the Americanized mispronunciation of the true French name “Les Chenneaux”.