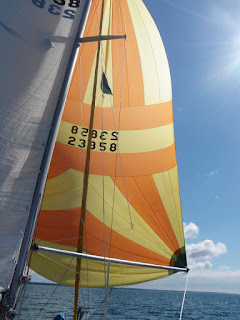 As we left the “Snows” in our wake we pointed the bow east and inched closer to the North Channel. The wind was light so we mostly motored, but around mid-day the wind increased to around 8 knots and we decided to try out our symmetrical tri-radial spinnaker for the first time. After stuffing the sack and rigging all the required extra gear, we hoisted the big yellow and orange sail. It took us about 10 minutes to get it trimmed out but when it was, wow…what a beautiful sail and a fun ride! We were doing 5.5 knots in the light air. Eventually, the wind began to shift off our port quarter so we had to douse the spinnaker, but we can’t wait to get it out again sometime soon!

We rounded the Detour Reef Light (complete with a man taking photographs of boats passing by) with a freighter steaming in off our starboard quarter. The freighter quickly overtook us as we all enjoyed the close up view of the big ship in the narrow Detour Passage. The passage serves as the main through route for all the freighters coming from the busy ports of Lake Superior down through the St. Mary’s River and into the lower lakes. It wasn’t long before we were near other big ships making runs to commercial ports all over the Midwest.

After a brief stop at Detour Village for fuel, ice and a pump out we were off to the natural beauty of Harbor Island for the first of three consecutive nights on the hook. When rounding east out of Detour Village we entered Potagannissing Bay and were in utter awe of the number of small forested islands surrounding us. We were finally putting some North Channel water beneath our keel and the geography reflected the accomplishment.


With the invaluable help of the laptop chart plotter, we weaved our way through small islands and rocky reefs on our way to the shelter of Harbor Island’s inner harbor. We sailed with just the full genoa on a broad reach at nearly 6 knots as we approached the federally owned island managed by the U.S. Fisheries and Wildlife Service as a bird sanctuary. The channel into the inner harbor is narrow but plenty deep with nearly 20 feet of water all the way in. The harbor quickly gets shallow so we set the hook close to the channel mouth and went ashore with Island Hopper. On shore we followed a thickly wooded trail to a rocky beach where Hannah and Isabel each found a monarch butterfly caterpillar that they decided to bring aboard Island Bound as the ship’s pets in lieu of Shasta (our dog) and Whitney (our cat). The caterpillar’s are named Lulu and Zinzie and now live in a milk jug with fresh milkweed.

While at Harbor Island, Erin and the girls swam and bathed in the relatively warm water. We also fished a bit but didn’t get a nibble. As dusk approached we watched rusty colored deer come out of the thick pine forest to feed on the lush shoreline vegetation. We were awestruck by the variety of bird songs that were new to our ears. This was truly a father’s day to remember! 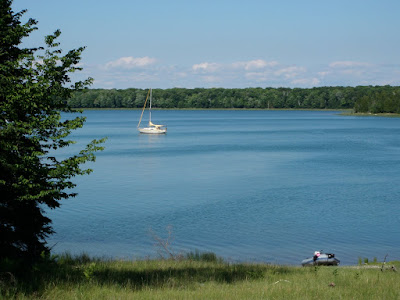