We all slept in and made a leisurely departure for tiny Pilot Cove on the eastern side of Drummond Island. The trip over was just under 4 hours. Hannah and I boarded Island hopper (our dinghy) to sound out the channel depth into Pilot Cove with our handheld depth finder prior to entering with the mothership. Unfortunately, the handheld depth sounder (Hawkeye XP100) wasn’t working, so we improvised and used a rope and rock to determine that depth in the narrow little channel leading into the peaceful and picture-perfect cove was only around 5 feet. This was too shallow to risk an entry with Island Bound. On paper, our sloop draws 4’6” of water, but we conservatively figure she probably has a draft of 5’ given the plethora of cruising gear we have aboard.

No worries as the sand bottom and spit of land just outside of Pilot Cove provided a safe anchorage for the night as long as the wind stayed out of the south and/or east. Luckily, it did. The forecast (both the NOAA and Canadian Fisheries and Oceans) called for 5-10 knots out of the southeast so all was well. Anchoring at Pilot Cove represented our third consecutive night at anchor and our 6th island visited, which is pure bliss for an islomaniac like myself. Pilot cove has a landscape befitting of a postcard. The tiny cove curls tightly and forms a brilliant blue water cove with a rocky beach and pine forest. The loons call at night and the deer invade the shoreline as the sun sets. I can’t imagine a prettier setting in all the Great Lakes.

To finish our night in the cove, we built a large cairn made of flat rocks and built a roaring campfire complete with s’mores. We watched Island Bound float gently in the waves and thought about all the amazing things we had already experienced and what lay ahead for us as our travels continued. 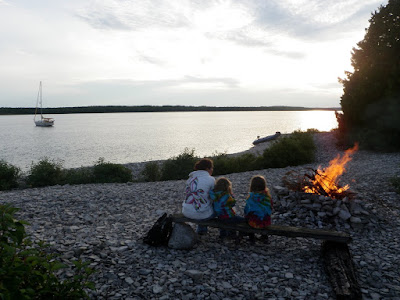 A heavy rain began to fall after midnight and didn’t stop until mid-afternoon the following day. We all stayed snug and dry overnight and tried to enjoy the sounds of distant thunder as we slept, though a thunder storm isn’t a sailor’s best friend due to the nearly 40’ lightening rod secured midships on our deck. Tuesday morning brought a heavy fog and 4-5 foot waves for our passage to sleepy Meldrum Bay on Manitoulin Island. 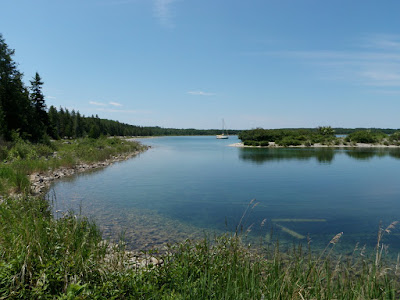