We left Gore Bay at noon under bright sun and scattered high clouds. The winds were heavy with a steady 20 knots blowing off our port quarter. There were gusts to 25 knots and waves building to 5 feet by day’s end. These weren’t ideal conditions, but we had a short sail planned and would have the wind and waves mostly behind us. Our original plan called for anchoring at Clapperton Island but with the heavy seas we didn’t think it would be safe to try and negotiate the many reefs guarding the western entry to Clapperton Harbor. Our goal is to make as much east as we can early in the trip, with Killarney and the end of Georgian Bay being our turnaround point, so Clapperton was to be a quick overnight stop on the way to Little Current and points east. The alternative we chose was South Benjamin Island, just a bit northwest of Clapperton.

The sail over to South Benjamin Island was another rough ride. We had a double reef in the main and only about a third of our 150% genoa deployed. Shortly after exiting Gore Bay, Isabel vomited from sea sickness. She’s much more prone to sea sickness then the rest of us, but there’s plenty of sailors who would’ve lost their breakfast on this ride. She fell asleep soon after vomiting. We try to give the girls Dramamine chewable tablets prior to rough rides, but had forgot on this day. Usually, the Dramamine works well and they both fall asleep when the going gets rough. As a side note, I once read that the best prevention for sea sickness is to sit in the shade beneath an oak tree by a church out in the country. Yeah, I suppose that would work!

If you haven’t heard about the navigational challenges of the North Channel, now is a good time for me to mention them. From Gore Bay eastward, the Channel is full of reefs, rocks, shoals and islands. It is absolutely necessary to know your exact position at all times and be able to cross reference this with the chart plotter as well as the backup paper charts. One old salt once told me that if you haven’t run aground, you haven’t cruised the North Channel. Another even crustier old salt at the White Lake Yacht club gave me this advice “If you see gulls and cormorants standing on the water, don‘t sail there!” Of course what he was referring to were the many rocky shoals that lurk just below the surface in this part of the North Channel. 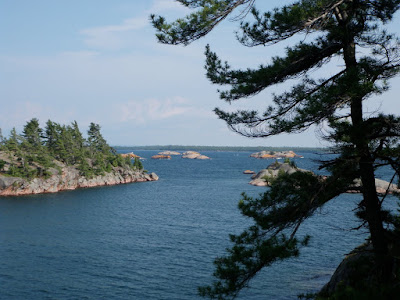 Between the chart plotter, the paper charts, the GPS and the aerial photos in the Ports Guide to the North Channel, we were able to successfully find and navigate the narrow pass into the long narrow bay on South Benjamin’s southwestern side. We ended up moving three times within the bay to find a comfortable, protected spot where the rollers and wind didn’t keep us rocking to much to get some sleep later that night.

The Benjamin’s are likely the most popular spot in the entire North Channel, and deservedly so. The pink granite of North and South Benjamin, along with Croker Island to the east, really stands out against the deep blue of Lake Huron’s water. The granite rises steeply in many places and much more gradually in others. The rocks are giant and smooth. Amazingly, there’s almost no soil on the islands but still mother nature found a way for pine trees and many shrubs and flowers to grow. The girls had blast scrambling through the moonscape and tiptoeing through the endless number of little pools. We’re only staying one night at the Benjamins now but will spend several days here on our way back through to the west. We picked out a few choice anchorages where you can tie the bow to shore and have a stern hook out to hold you tight among the many rocky little coves. 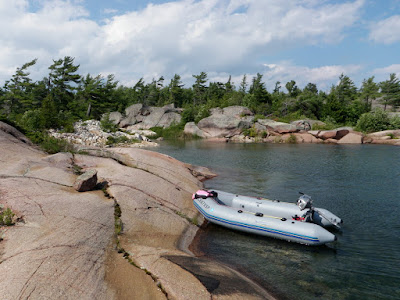 Neither Erin nor myself slept very well as the boat rolled and bobbed all night long in the strong winds and big waves, even way back in the protection of the bay. Our anchor is almost comically oversized for our boat (33lbs Lewmar Claw) but I still set an anchor alarm with the GPS and kept it next to my head all night. I awoke 4 different times and went on deck to check our position and make sure the rock wall to our west wasn’t moving closer. Amazingly, we were the only boat at South Benjamin that night. I’ll be very surprised if that’s the case when we pass back through in a couple of weeks. 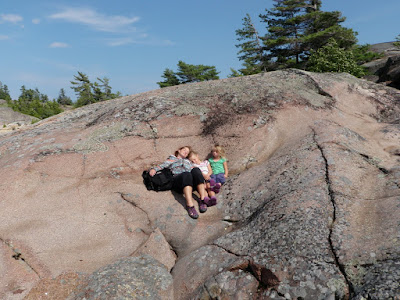