We departed Frankfort bound for the quiet calm of South Manitou Island at approximately 9am. The morning began with patchy clouds but became overcast as we headed north into the wind with the motor. Waves were calm to 2 feet. The girls mostly played below as Otto had the helm and Erin and I kept watch and played navigator. This was the first time in our voyage that we’d be crossing the north and south bound shipping lanes in Manitou Passage, so we scanned the horizon frequently looking for freighters. We spotted a couple in the distance, but didn’t pass any closer than a couple of miles. As we approached South Manitou from the south we were able to clearly see the wreck of the Morazan resting in shallow waters just off the southern end of the island. The girls had plenty of questions about how the wreck got there, where the people went to and what was left in the ship. If we would have had more time we could have anchored nearby and took the dinghy over for a closer look. 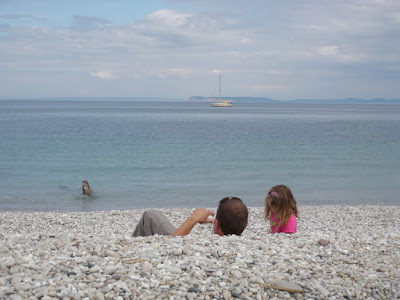 South Manitou Island is part of the Sleeping Bear Dunes National Seashore and is thus managed by the National Park Service. It’s a beautiful island with high sandy bluffs on the western shores and a low lying rocky beach on the eastern side. While there’s a ranger station on the eastern side, the island is uninhabited. Having an island to explore all to ourselves was an exciting adventure for the entire crew. The only safe overnight anchorage is in the crescent shaped bay on the eastern shore of the island. Anchoring here is only advisable if the wind is from the N/NW, which it was on this day. We dropped the hook in about 30 feet of clear blue water and went to shore in the dinghy. The beach was made entirely of smooth, surf pound rocks. After exploring the beach , we took a trail inland about 1 mile and discovered an abandoned farm and orchard. The girls had fun climbing on the old horse-drawn farm equipment. We then followed the trail to the old one room schoolhouse. On the hike back to the beach we saw an amazing example of camouflage. A small yellow butterfly appeared to be resting on an equally brilliant yellow flower. On closer inspection we found that the butterfly was actually ambushed by an amazing looking yellow spider that apparently hides out on yellow flowers waiting for its’ prey to make a landing. Very cool!

After getting back on board Island Bound, we were all hungry from our adventures ashore. We cooked up asparagus and spaghetti and enjoyed the calmest evening I’ve ever witnessed on Lake Michigan. The water was literally like glass as the boat floated over her slack anchor rode. After dinner we took full advantage of being the only ones staying in the anchorage that evening. The bay had an amazing ability to echo back our shouts, songs and laughter because of the forest just beyond the water’s edge. We had a blast calling to shore and listening to our voices bounces back to us. We all slept peacefully under a crescent moon in a crescent shaped harbor on our own little deserted island.

Pictures to follow when we have a faster internet connection!