The first step...(Beginning a Cruise)

Our journey has officially begun. Island Bound departed North Shore Marina in Grand Haven on Monday, June 7th at approximately 6am and headed north. Onboard were myself (Kevin) and my dad. My dad was coming along as crew for the first day or two, then I plan to single-handedly cruise for a couple days and then s/v Island Bound will pick up her permanent crew (Erin, Hannah, Isabel) and the four of us will continue on.


The weather on Monday was sunny with winds building throughout the day to around 10-12 knots out of the northwest. Waves were calm early, but built to 2-3 feet by mid afternoon. My dad and I motored north of Grand Haven at about 5 knots since the wind was too light for sailing. We had out a fishing pole with a North Port Nailer and Dipsy Diver, but didn’t catch a thing. The air temp was in the 50’s and we were both wearing sweatshirts, wind jackets and beanie caps.

After motoring for about 2-3 hours and 12 nautical miles, the engine bogged down and acted like it was going to stall, so I quickly put the transmission in neutral, which brought her back to life. Each time I shifted to forward or reverse, the engine would bog down and quit. We both immediately suspected a transmission problem or an entanglement on the prop and shaft since we had passed many trap nets heading north. I clambered below decks and dug out the snorkel gear so I could have a look at the prop shaft. The water temperature was in the low 50’s so I hopped on the dinghy and just dunked my head below the surface with my mask on so I wouldn’t have to endure the chilling water on my full body unless there was something on the prop. There wasn’t.

After calling Tow-Boat U.S. and getting a tow (thanks for the towing insurance dad!) into Muskegon for repairs, we sat at the dock and ate lunch while awaiting the mechanic. I was VERY happily surprised to hear that the transmission was fine and that the points on the distributor just needed filing and greasing. Apparently, the points were in rough shape and they couldn’t supply enough juice when the engine was under load, such as being in gear. Luckily the repair was quick (~30 minutes) and inexpensive ($40). If I hadn’t had the towing insurance, the total cost would have exceeded $500. My dad and I quickly got back underway and motored into north winds and 2-3 foot seas to White Lake Yacht Club for the night. The following day we had east winds of 8-10 knots and a delightful sail north to Ludington. A rainy system moved through on Tuesday evening and all day Wednesday, so the boat stayed tied up in Ludington until Thursday morning.

So day one of our long journey quickly taught me something I’m sure other cruisers have learned: patience! I once read that the definition of cruising is fixing your boat in exotic locations. I’m not sure that Muskegon qualifies as exotic, but I’m now aware that there will be other days when travel is cut short due to repairs, weather and any number of other reasons. 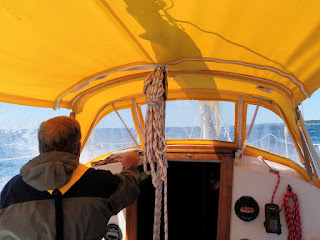