We left Charlevoix in the rain in time to make the second drawbridge opening of the morning at 6:30am. We were headed to Beaver Island. There was a thick fog on Lake Michigan as we left the protection of the pier head. We have a Davis Instruments Echomaster Deluxe radar reflector hung from our portside spreader, so hopefully we’re as visible as possible to traffic on the lake. Still, fog is eerie to travel in when you don’t have radar. We knew exactly where we were because of our chart plotter, but it was important that we kept a close watch for ships and boats through the fog.
As the seas began to build to 3 and 4 footers, the fog lifted and was filled in by an overcast sky and rain showers. At about 9:30am we noticed the ferry boat Emerald Isle off our stern port quarter. I radioed the captain of the ferry via VHF to make sure he saw us. He confirmed that he did and said he’d give us a wide margin as he passed to our port. The rest of the ride over to Beaver Island was wet, cold and rough. The girls stayed snug in the cabin in their sleeping bags until noon, riding out the heavy seas. We once again were close hauled and beating into the wind with chop and 3-4’ rollers on our starboard bow. Island Bound handles the conditions well and feels safe at all times, but that doesn’t mean her crew doesn’t get fatigued! We felt it was too rough and rolly for Otto to steer, so we had the added effort of hand steering the 26 nautical miles over to the island.
We arrived safely in St. James Harbor on Beaver Island at around 1pm and promptly proceeded to the gas barge for refueling and a pumpout. Then we anchored in about 20 feet of water in the harbor before going ashore in Island Hopper for some shopping, exploring and playing. The girls twice enjoyed the playground at the beach. We also took in a couple of gift shops and had ice cream while in St. James. I also found a PVC plumbing fitting to use as a temporary deck cap for waste tank because the threads on the original had corroded and broke.

Beaver Island is the most isolate (furthest from shore) island in the Great Lakes with year-round residents. About 600 people call the island home each year. If you haven’t read the history of the island, you should! The founder of Mormonism, King James Strang, declared rule over the island and set up home base there in the 1800’s. There’s pieces of history on every corner and plenty of Irish heritage to read about too.


While not as quiet as South Manitou Island, Beaver’s harbor was nearly as restful with very little wave action and a beautiful sunset. We dined on grilled lake trout and portabella mushrooms as we eased into the evening. The kids (and adults!) enjoyed swaying in the hammock as the boat gently swung at anchor. 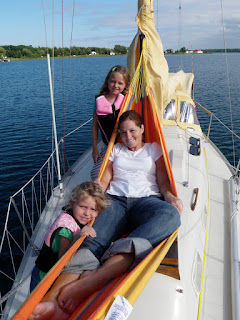