I awoke with the sun on Thursday morning and pulled the anchor while all three “girls” slept soundly. I was eager to make the passage from Beaver Island to Mackinac as it’s one I’ve often envisioned while planning this trip. As I motored out of St. James harbor I was surrounded by the other islands in the Beaver archipelago. Both High and Garden Island beckoned as I continued east. Perhaps we’ll explore them on the way back home.

Beaver Island to the mainland of Michigan’s lower peninsula covers a shallow area of shoals and reefs known broadly as Gray’s Reef. It’s eerie to sail several miles from land and still see the bottom and watch boulders and sand patches glide by beneath the hull. Most of the way from Beaver Island to the abandoned lighthouse marking the beginning of the Mackinac Straits is just 20 feet or less of water depth. We passed by a total of three mid-lake lighthouse on passage through Gray’s Reef, two of which are still functional.

The day was clear with blue skies, warm temperatures (~75 degrees) and light winds out of the west at around 5 knots. We could see the two towers of the mighty Mackinac bridge from many miles away. They made a great aiming point as we watched them grow on the horizon. The closer we got the more excited the captain and crew became. I’ve always dreamed of sailing my own boat under the Mac Bridge ever since my mom and dad took me on the inland waterway from Crooked Lake all the way to Mackinac Island on our 18 foot open bow runabout. 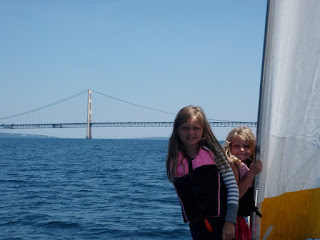 The Straits are filled with shipwrecks and sea stories. We witnessed several blue and white buoys presumably marking wrecks and also saw a couple of recreational dive boats at some of the sites. We readied the cameras, both still and video, as we began to sail beneath the Mackinac Bridge. Even though the big bridge towers overhead, there’s an illusion that makes it seem as if the mast may not clear. It was great fun to watch the faces of my daughters as we glided beneath the traffic. On the other side we were quickly greeted by oodles of ferries headed to and from Mackinac Island. Luckily the harbor on the island had an open slip for us so we decided to stay two nights and recharge.