I just realized that we never formally introduced our dinghy.  We actually purchased her in 2008 back when we had our first sailboat, s/v Hannabel.  She's a Sandpiper 8 rowing dinghy made of a plastic polymer.  The girls quickly christened her "Lil' Coconut", for what reason we do not know.  However, now that she serves as the tender for s/v Island Bound, the name somehow seems appropriate.

Lil' Coconut is small and tippy.  She barely has room for two adults, though we've rowed her with two adults and both kids aboard.  She looks a lot like a bathtub and quickly fills with rainwater.  However, she makes up for her faults with her snooty sheerline and shippy looks.  And she does row pretty well. 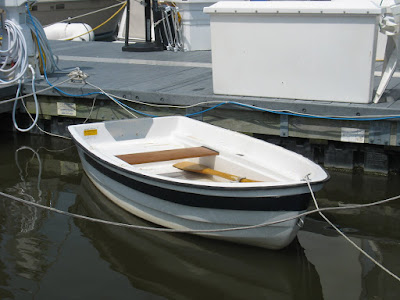 We haven't decided if Lil' Coconut will come with us on the summer cruise for 2010.  As mentioned above, she's a little too small for the four of us, particularly when we plan to be anchoring out the majority of the time and will likely need the services of a good, stable tender.  She also doesn't have a motor.  We may just leave her at the marina in favor of a rigid inflatable boat (RIB) with a small outboard.  In any case, don't think for one moment that we don't love her!  She'll even be the recipient of a new yellow cove stripe in the spring to match the mothership.