Helms Yachts were built in South Carolina during the 1970s and early 1980s by Jack Helms. Only 600-800 boats were built. Jack supposedly peronally delivered every boat. The company's first boat was the Helms 25. Jack Helms said that he wanted to create a "better Catalina 22." Sometime in the 1970s a 25 won its class in the MORC.
Eventually a 27 was added, followed by the 30 which was eventually replaced by a 32 footer. Several hundred of the 24, 25, 27 and 30 foot boats were built, but only 10 of the 32 foot were ever built.

As previously mentioned, the Helms 25 was created to be a "better Catalina 22". The Helms 25 looks very similar (almost identical) to the Catalina 22 except for a 3 foot extension to the cockpit. This extension allows the Helms to seat 6 in the cockpit while cruising or four while racing. The C22 only seats a maximum of 4.

Both boats are swing keel designs which makes them popular with trailer-sailors. They also feature a tiller-rudder and sloop rigged sails. Our particular Helms 25 has the following sail inventory: main, storm jib, genoa, and spinnaker.

The cabin features a v-berth forward, convertible dinette to port, sink, built-in cooler, and settee/single berth to starboard. There's also space for a porta-potti, but the potti is absent. We'll likely use a milk jug or "Dawn" bottle for our latrine.
The next blog post will feature more pictures to familiarize you with our specific Helms 25. Stay tuned! 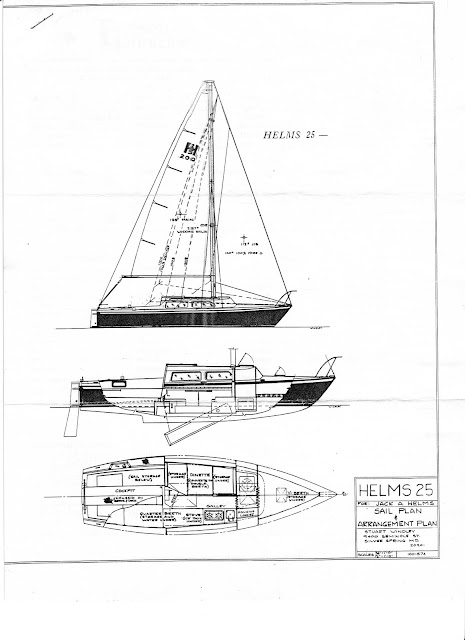